Nothing gets my goat worse than the intentional breakup.

You know the one I mean. First you have the love interests in a sitcom slowly get together over the course of two seasons. Then yay! First kiss! First sex! Meet the parents! I love yous are exchanged. All the token, early-relationship milestones are hit one after the next.

But then what? Where does your story go from there? Well, apparently down the toilet.

When your plot line is 100% will-they-won’t-they, then that’s about it. You’ve told your story. Time to wrap it up.

Unfortunately for most sitcoms, if the show is still making money, they’re still making episodes. That means they have to – dun dun dun – MANUFACTURE DRAMA, often by having the love interests break up.

I get why they do it. Now the writers have all sorts of material to work with as they slowly get the love interests back together over the course of the next few seasons. The only problem? We’ve already been there and done that.

This is one of my all time favorite rom com shows. In fact, I was currently in the middle of yet another re-watch when I got to the end of season three and got stuck. Because despite everything else this show did right, the intentional breakup was the one thing they did really, really wrong.

Nick and Jess are by far my favorite on screen couple, and it’s 100% because of Jake Johnson’s Nick. I don’t know what it is, but that grungy bastard is my ideal male love interest. He is in love with Jess from the very first episode, and he shows it in a thousand tiny ways every time he’s on screen with her. I just eat it up.

So of course I was over the moon when they finally got together. I rode a major high all the way through season three, watching those characters be together and happy and in love. That’s what I’m here for.

And then BAM. We get clobbered with the intentional breakup.

And why? Just so they can date other people for a minute, and then have the drama of getting together again two seasons later. Because that’s what romance writers seem to think the audience wants. Not seeing a stable relationship on the page or screen, but in seeing the drama of how that relationship got going.

We get told “happily ever after” but very rarely do we actually get to experience it. 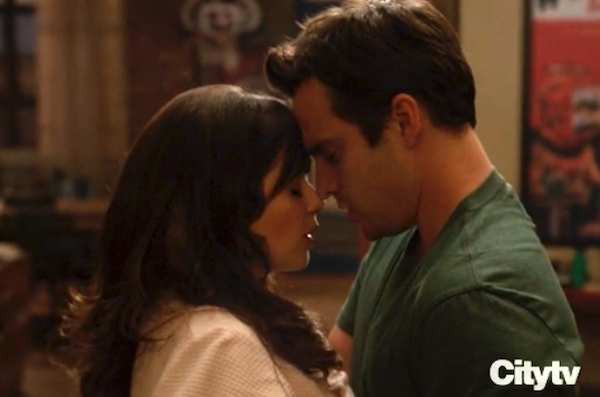 The characters did a lot of growing while they were apart, and I applaud the writers for curating those character arcs. But did they really have to do that growing apart from each other? Couldn’t they have supported each other, learned with each other, and figured it out while together?

Because as much as I enjoyed their first kiss, I enjoyed little moments like this just as much:

This was such a little thing, just them picking out an e-vite template for a holiday dinner. But it was lovely watching them be casual and comfortable with each other, laughing at a cartoon pilgrim announcing Thanksgiving.

Can you tell I’m sour about this subject? This entire blog post is devoted to a rant, and I don’t even care.

I stopped watching New Girl in that sweet spot between “I fell in love with her the minute she walked in the door.” and “Are we breaking up??” Now, in my mind, they never break up. They’re just in love forever.

So I switched to another old favorite of mine: Gilmore Girls. Only guess what I forgot about?

This show is just one intentional breakup after another. Like, every single relationship either of the girls have breaks up just to get back together later. And I’m just left banging my head against a wall. The writers really enjoy squeezing every last drop out of the will-they-won’t-they trope that they can. 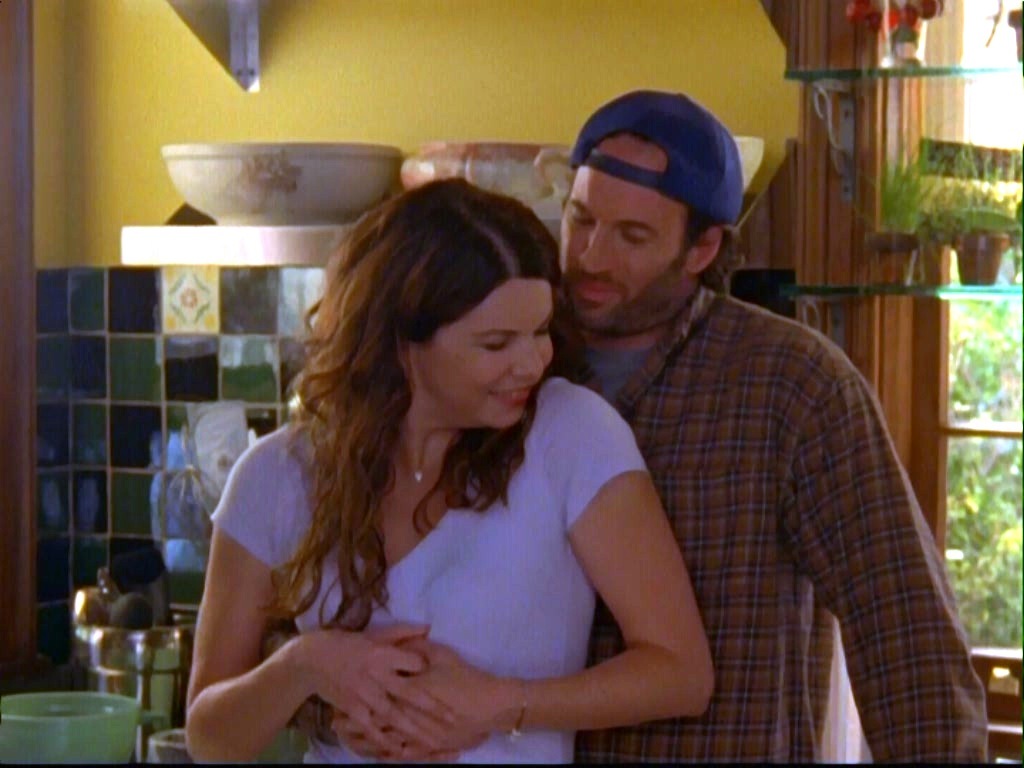 Look at those two? Why would anyone break them up just to service a plot line? A masochist, that’s who.

Fortunately some people do understand the concept of putting “happily ever after” on the screen. Parks and Rec is an excellent example of the right way to curate a romantic relationship. Ben is introduced in season 2. He and Leslie start crushing on each other and begin dating in season 3. They break up for like, 4 episodes because plot reasons, and then they decide to be together.

And here’s the kicker: They stay together for the rest of the show. They are together for four seasons right through the series finale.

And Andy and April are together even longer. They get married in season three, then stay together. And we get to watch them be happy and in love for 5 full seasons.

They still grow, mature, learn, overcome obstacles both inside and outside of their relationship. And they never once stop being romance gold on screen. Creepy, goofy, and weird, but romance gold.

And that’s the magic I want to capture in my books. Not just a long book full of will-they-won’t-they, with a big kiss and a “Happily Ever After” in the final chapter. That stuff makes good romance, but I’m getting bored of it.

Nope, I try to make a deliberate choice to have my love interests get together in the beginning of the book, and then be together for the duration. Because that’s the sort of romance that gets me going these days.

And as a personal gift from me to you, Mae and Jamie get together in Chapter Four, and they stay together to the end. You’re welcome.