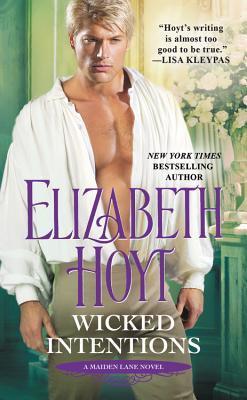 I was willing to put up with the mediocre writing, because the smut seemed promising. Unfortunately, I didn’t make it to the steamy scenes hinted at in early chapters, because it turns out Lord Caire is a magnificent asshole.

First and foremost, the mediocre writing comment. It’s okay, not great. Hoyt overuses the word “was” way too much. It’s an extremely common word, but there were plenty of times when she could have used a much stronger verb. She’s also guilty of using frequent filter words.

But the thing that bothered me most was the forced old-timey writing. The book was basically written the way we talk today, but with a few obvious antiquated words thrown in. “Morrow” instead of “tomorrow.” “Naught” instead of “nothing.” That kind of thing. It was entirely unnecessary. If you can’t write in a proper voice, just leave it, you know?

“She and Nell might’ve made this dangerous outing for naught.”

But that stuff I can overlook if the characters and the relationships are solid. Unfortunately, that turned out NOT to be the case.

This book seemed quite promising at first. It seemed like decent romance escapism, nothing spectacular, but certainly good enough to enjoy. You’ve got your lady-like main character, Temperance Dews, a young widow with a secret desire she keeps hidden carefully away. And you have the love interest, Lord Caire. He is mysterious, fabulously rich, closed off, dislikes being touched, and claims to be unable to feel. He’s looking for a killer, and Mrs. Dews is the perfect option for taking him around the slummy St. Giles. In return, he’ll introduce her to high society so she can find a new patron for her charity house for orphans.

Wicked Intentions is available now in your local library and on Amazon. You can read more reviews for it on Goodreads.

All the building blocks are there, right? This beautiful, secretly seductive woman will charm the grumpy lord into falling in love, which he never thought possible. Great stuff. Until…

I was enjoying myself perfectly fine until Lord Caire unmasked himself as a gigantic jerk face. I let the first oppressive remark go by. It was a different time. This is common in historical romance. But by the third and the fourth? Nah. I’m out. We didn’t fight for centuries for reform and gender equality to still be putting this kind of crap out into the world.

There were several examples of Lord Caire’s assholery, but I’ll stick to the two that were bad enough for me to stop what I was doing and jot them down.

This is supposed to be a magical, passionate, romantic, exciting thing. So why in the heck did it get jammed into the middle of Temperance telling an awful, terrible, depressingly sad story about not being able to save children from being sold for profit?

What in the hell? Talk about changing the subject. I’m so sorry Temperance, that’s a very sad story you’re telling me. Let me interrupt you with this “crushing” kiss.

“She sold that sweet baby boy, and I could do nothing to save him.”

One moment she was crying in fury up at him and the next he’d swooped down and caught her mouth. Hard, with no mercy.

I mean, you’d think this was him comforting her or something, but it’s not. Here’s his comment afterwards:

“You are such a passionate creature,” he murmured, examining her from beneath half-lowered eyelids. “So emotional.”

Yeah man. That sounds nice on its own, but in context? Her “passionate” emotion was despair and regret and horror over someone selling children. That’s not your cue for sexy times.

I mean, how fucked up do you have to be to get attracted to a person when they’re seriously upset and horrified over the loss of basic human rights for children?

“Perhaps I don’t take orders from you, my lord.”

“Don’t take orders,” he sputtered like an overwrought old woman. One part of his brain was amused at what an ass he was being, while another part found it very, very important that she know that she had to obey him. “Let me tell you—”

What is it about disobedience in cheap romance? Like, why is that the go-to quirk that the ladies get? That woman isn’t obeying her love interest, and it’s driving him wild, boy howdy!

I mean, what kind of an asshole orders women around, expects them all to meekly obey, but only respects the one who doesn’t? And why would any woman like a man like that anyway?

Oh man, I could do a whole rant on disobedience, so I won’t go too deep into it here. But by god, this whole thing just gets my blood going.

And the Final Straw:

The other man’s glance flicked between him and Mrs. Dews. “And does she have no say in this matter?”

“No,” Lazarus growled, aware that he sounded like a dog standing guard over a bone.

Yeah, fuck you, dude. I’m so done. This is way beyond the possessiveness that is so popular with these closed-off, guarded, passionate men. That’s ownership talk, possession, lack of consent, taking away her right of refusal. That’s a complete and utter lack of respect for her. That man doesn’t love her. I don’t care what time period this is. That’s effing gross.

So yeah, that’s a Did Not Finish from me. I’m not in this to romanticize assholes.

Have you read Wicked Intentions? What did you think of it? Let me know in the comments. And don’t forget to check out my other book reviews before you go!

Oh, and just to be official, this one is going on the record as “destructive romance.”

Just in case you couldn’t tell.