I think we can all agree that Community is one of the better caricature sitcoms out there. The acting, writing, and comedy gags are just spectacular. Top notch, especially in early seasons. And even though this is not a romance show per se, romance is often an expected subplot at least. But the show never really went that route, which is totally fine. The ensemble cast relationships and antics were more than enough to carry the stories and keep the audience entertained, which is the entire point, right?

But the writers kind of dabbled in romance anyway, and they did a sloppy job of it, to boot. And then it never went anywhere. Which left us lovers of love feeling a little… let down.

After a recent rewatch of season one, I think I’ve got a handle on what went wrong. And it all boils down to not knowing your tropes. The trope in question?

This is one of my all time favorite tropes. You have one character grumpy, closed off, distant, and a little gruff. He keeps everyone at arm’s length, and never lets anyone in. The love interest is some version of sweet, lovable, outgoing, optimistic, and bright. They are a ray of sunshine. Literally. And that sweet little slice of life is what usually cracks the dam in the grump’s emotional walls. He opens up to her, he finds her cute, and can never resist her persistent optimism.

And in case you couldn’t tell from the post title, Community’s grump and sunshine are Jeff and Annie respectively. 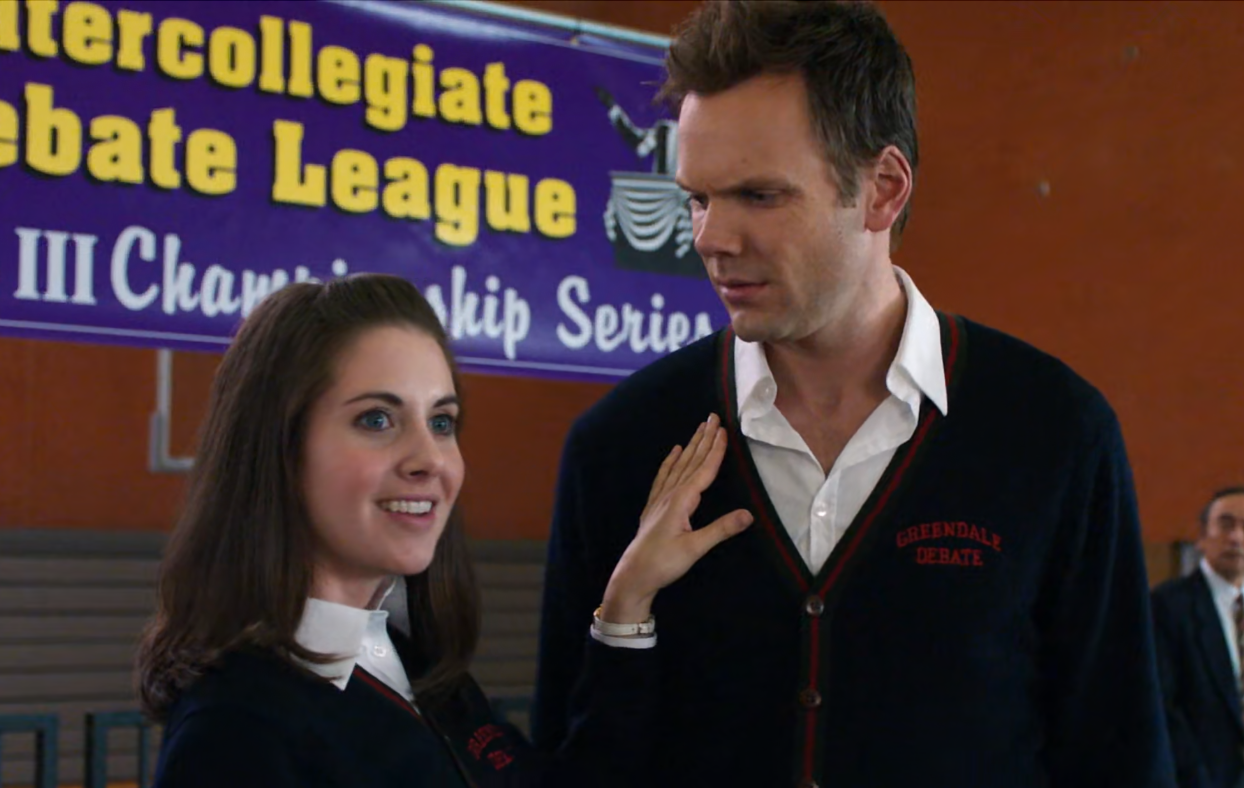 And don’t you start saying I’m seeing what I want to see! Because I took notes! I watched season one and wrote down every trope setup the writers used to set up a romance between this grump and his ray of sunshine. Let’s dig in.

I swear to god I’m not obsessed, but the amount of detail I’m about to spew at you is going to make me look a little bit nuts. I don’t even care. It begins with episode six.

This is the first major interaction between Jeff and Annie. She is mad at him for manipulating Troy, and he yells at her for it. He calls her selfish, and gives her a talking to about not supporting Troy. Annie leaves in a huff.

And here’s where it gets interesting. As Annie stalks off, Jeff yells after her, “Look, don’t bother trying that thing that women do where they walk away and make the guy feel like crap because it won’t happen! Yeah!! …damn it.”

Why is that interesting? Because for the first time in the show, Jeff begins to regret making someone feel bad.

He immediately resolves to fix things. Entirely unprompted, he reverses his manipulation of Troy, and then apologizes to Annie for yelling at her. It’s a first for Jeff Winger.

Annie also listens to Jeff. She takes stock of the faults he pointed out, and resolved to be better. He then shields her from the freaky-ass Greendale Human Being, then casually invites her to go to the football game with him.

These are all classic setups for the grumpy/sunshine trope. At the first sign that her sunshine is dimmed, he becomes protective of her emotional state. He gives up his own motivations and immediately tries to help Annie instead of himself. Why? To make her happy. To bring back the sunshine.

In the very next episode, we get another classic example of grumpy/sunshine trope. Annie asks Jeff to attend her party in order to help her look cool. (This was one of my favorite interactions on the show, btw.) Here it is, linked to the relevant moment.

She starts by being overly assertive. “I am putting my foot down, you understand? I am being assertive. And I am making eye contact. And it is achieving results!”

He of course it doesn’t work on him. He’s the grump. He is immune to tough attitudes.

But when she starts crying? Yeah, he’s done for. He tries to fight it. But in the end, even though he knows she’s exaggerating her upset, he caves anyway.

This is when the two characters first see each other as a sexual object. And they are NOT subtle about it. When she lets her hair down and shows a teeny tiny bit of cleavage, he is insta-horny. Like, bam. They both are. And suddenly they can’t touch each other anymore. He even leaves behind his phone so he can get away from her faster.

I did a post on touching in my series Writing Close. But that denotes closeness. Comfortableness. When two characters actively avoid touching each other, that speaks more to sexual chemistry than intimacy. And in romance, sex is just as important as an emotional connection. This is where the writers check that box.

And for our grumpy/sunshine trope, this setup is right on target. Commonly (though not exclusively), the grump sees the sunshine as overly innocent and naive in early days. In those cases, there is always a turning point early on where suddenly the sunshine becomes sexually attractive.

And of course, this is also the episode with their first kiss. 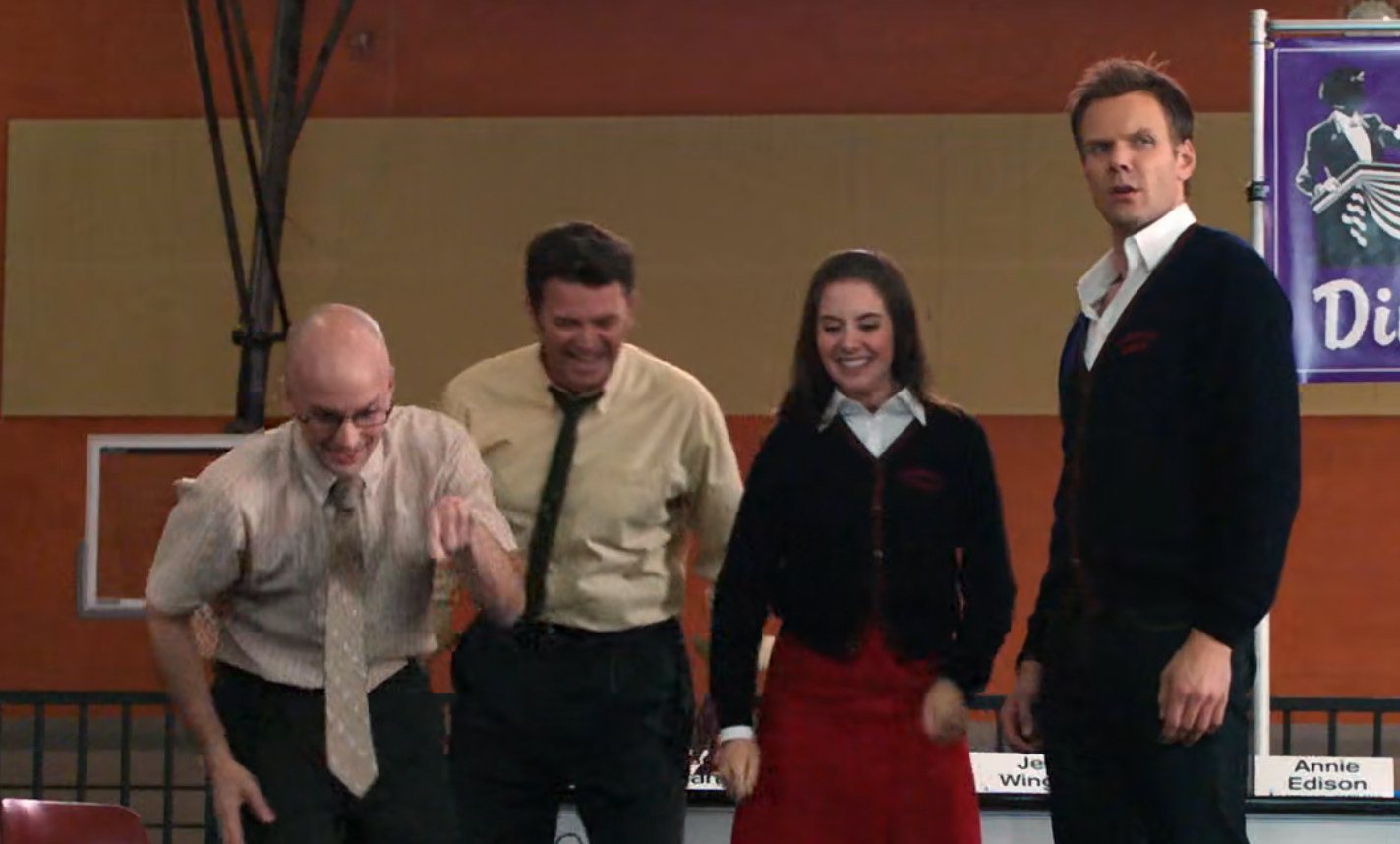 When she kisses him, he immediately kissed her back. And when he realized she was just using him to make a point, he is completely baffled. he is THROWN. He just stands there, looking confused. He doesn’t cheer for their win, he can’t even speak. Because for him, that was their first kiss. It was the first proof that his sudden sexual desires about her had real potential.

The main point I’d like to focus on for this episode is the round table near the end. Britta accuses Jeff of being jealous for Annie, calling her his “debate/makeout partner.” At which point we get this exchange:

Annie says, “I took that kiss for the team!”

Annie then gives him the side eye to remind him they’re keeping their sexual attraction secret. He gets back on the ball and calls the kiss “strategic and joyless.”

At which point Jeff has to give HER the side eye. Because they both really enjoyed that kiss. Obviously.

And THEN when jeff says “there’s nothing to stop any one of us from looking at any of the others as a sexual prospect.” And then they all eye each other. And they’re all a little grossed out.

But of all of the couples, Jeff and Annie get double time, no grossing out, and a secret smile from both partners.

And we all enjoyed this moment when Jeff gets naked for a crazy game of pool. 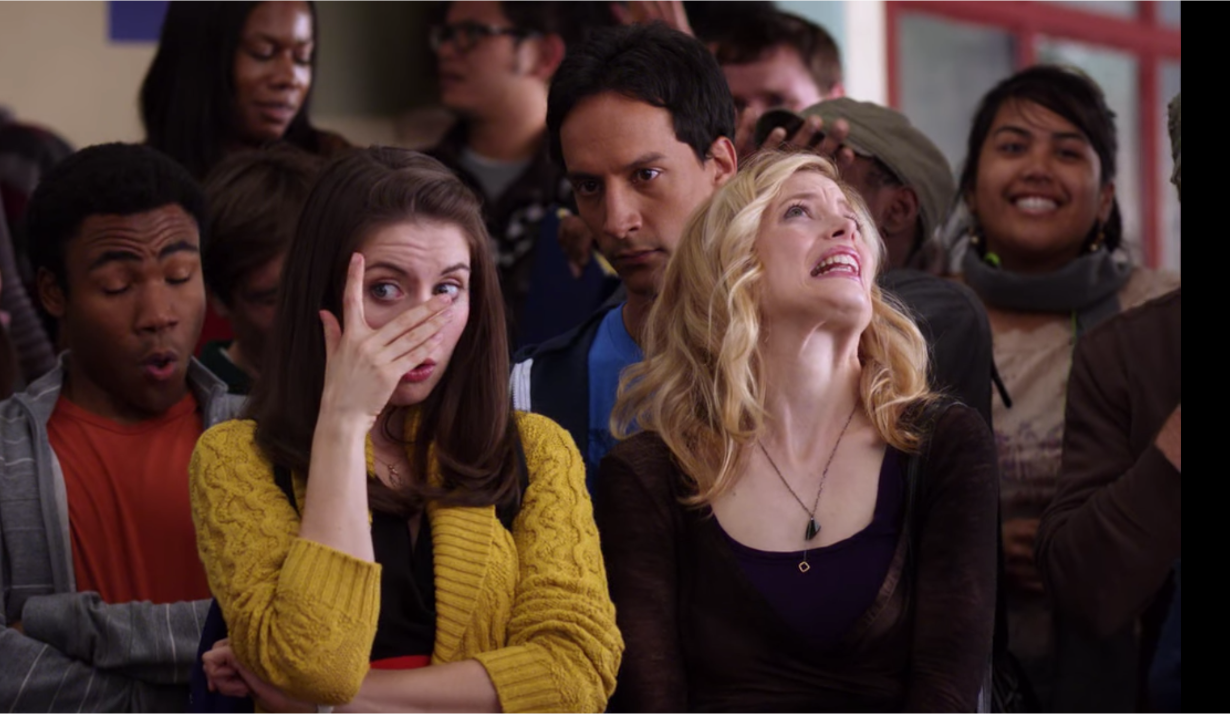 I ask you, why in the heck did the writers throw us all these road signs, only to have it go NOWHERE? There were more. Yes, I had even more examples documented like a lunatic, but this is getting out of hand already. I haven’t even gotten to the Britta comparisons, yet.

We’ll run through Britta briefly. She was set up as Jeff’s romantic interest from the very first moments. She was the one member of the group of Jeff’s preferred gender, in his age range, and pretty. So of course she was the one he zeroed in on. But it was only ever about sex with her. Sure, they got along fine, but he never let her in. She wasn’t sunshine enough for him. She never was.

In S01E03, Abed’s dad calls Britta a bitch. Jeff barely bats an eye. In contrast, in S01E09, Simmons teases Annie for her poor score in debate and calls her Annie Adderall. “That’s it!” Jeff yells, and suddenly he’s in it to win it. He’s going to beat Simmons at debate no matter what it takes. Why? Because he was mean to Annie.

When Britta dates Vaughn, Jeff is a little jealous, but he resolves to be okay with the relationship. When he catches them kissing, he says casually, “That’s not what I wanted to see.”

Annie later dates the same hippie, and he gets visibly angry. “What is Annie doing talking to Micronipples!?” He then spends the entire episode trying to break them up.

In S01E23, Abed summed up Jeff and Britta’s relationship in true Abed style: “your sexual tension and lack of chemistry are putting us all on edge.”

And in the last episode of the season, Jeff opens up to Annie about his feelings for two other women. “Slater makes me feel like the guy I want to be, but Britta makes me feel like the man I really am.” You’d think the line about Britta would be a home run in Britta’s favor, but it’s not. Why? Because he says it to Annie. He opened up to Annie, not Britta. He says Britta makes him feel like himself, but he only acts like himself with Annie. No masks, no hiding his feelings.

And then? The big kiss. And we’ve seen it coming, and it’s glorious.

And then the writers crap their pants. I mean, not in general. Again, Community as a whole is amazing. But for Jeff’s relationship arc with Annie? The writers totally shit the bed. They reversed all the setup they did, and instead of moving forward in the relationship arc in season 2, they continue on in limbo. They continue sitting Britta next to Jeff. Jeff continues treating Annie like a child. He insists there’s nothing between them.

And there are a smattering of hints that something may be on the horizon between them. Maybe they just need time for Annie to grow up and for Jeff to soften up. A near kiss, plenty of longing looks, and Jeff continually gets jealous about Annie’s romantic partners… But no. Nothing. It never comes to anything. And even though fans of comedy agree Community is a gem, the romance lovers get the shaft.

They even went so far as to have Jeff intentionally nullify all the longing looks by saying they were all in Annie’s head. Boo. Not cool cool cool.

It would be totally fine to omit the romance entirely, but to tease us with it and then fail to deliver? Blech. Not satisfied with the romance. 4/10