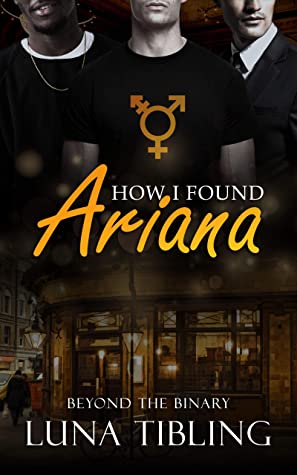 How I Found Ariana is a soulful introspective into the daily struggle of Skylar, a person with depression and body dysphoria in a world that doesn’t quite understand them.

I will admit, I did not read the blurb before agreeing to read this book. I commented on a romance forum that I was looking for a new book to read and review, which is where the author reached out to me. That circumstance lead me to believe it would be a lgbtq+ romance, and I didn’t question my assumption even once.

Boy was I wrong. There is an existing romance for the main character, Skylar, with their two boyfriends, but that romance was NOT a plot point in any way.

If I had read the blurb first, I probably would not have read this book at all. I prefer happy books with happy endings and happy middles. Escapism. Fantasy, romance, and humor. That’s my tagline. So if I had known this book was about depression and stress, I wouldn’t have picked it up.

Boy am I glad I didn’t read the blurb first.

How I Found Ariana is available now on Amazon. You can learn more about the author on their Facebook page and connect with them on Instagram.

I usually like to start with the pros first, but let’s switch it up a little this time. Spoilers ahead.

I expected a book titled How I Found Ariana to be mainly about a character named Ariana. And for the first couple of chapters, this hypothesis held up.

But it turns out that Ariana doesn’t have much of a story to tell, at least not in this book. She doesn’t even have much of a character. She seems to exist solely as a source of stress for Skylar, and is sent to live with someone else by the end of chapter six. Then, aside from a few short appearances at parties where she is a background character, she doesn’t have any more meaningful interactions until the last couple of pages of the book.

So while all this is perfectly fine, it makes me think the title isn’t very fitting. This book simply is not about Ariana, much less finding her.

There is some hint of the difficultly Ariana struggles with, but the reader only gets the Cliff’s Notes. She is kicked out by her parents for coming out as trans, but her supportive and loving friends are a source of comfort for her. She is excited to begin living openly as a woman, and the reader gets snippets of talk about bras, shaving legs, and picking out dresses.

As someone who is very, very straight, it was interesting to get this glimpse into the life of someone who must actively discover and create identity, rather than have it be a given. But these short scenes with Ariana felt more like an after school special than a story about a character. It is a fictional how-to of how to be supportive of a loved one who is queer.

Skylar, along with all their friends, provide perfect examples of how to handle Ariana’s coming out. Clearly the point of this is not to tell a story, but an attempt to make a statement on how society should be handling these sorts of situations. This was made even more painfully obvious when Ariana uses the women’s restroom for the first time.

‘So,’ Dale leans forward, looking serious, ‘in a female-only safe space with all those women in their most vulnerable states, you’re absolutely sure you didn’t prey on any of them?’

‘Amazing,’ says Dale, looking up with a furrowed brow and stroking his chin. ‘I wonder what dear Rowling would think of that…’

How I Found Ariana – Chapter 9

This isn’t story telling. This is the author taking the opportunity to make a political statement. It’s an entirely correct statement, of course, but it doesn’t belong in this context.

And it’s entirely unnecessary as well. These statements didn’t need to be made outright to get the message across. Skylar’s daily struggles at their job were more than enough to create a human face behind the misunderstood labels. And what’s more, those struggles were active story telling, not politicizing.

But enough with the negatives. I actually loved this book, despite my gripes about the titular character. I will admit the middle was a bit slow, mostly details about Skylar’s customer service calls, but looking back, those scenes were necessary for the ending to work.

As I said before, this book is about Skylar’s struggles with depression. The author does an excellent job of setting up the cyclical, recurring nature of depression. It never really goes away, it simply comes in waves.

The plot arc mirrors this pattern beautifully. How I Found Ariana doesn’t rise steadily to an intense climax where Skylar has to muster all their courage in a final push to save the day. Instead the plot arc wallows, sometimes high, sometimes low. And the climax, like a bad bout of depression, is an all time low point that Skylar has to claw their way out of.

Not many books can make me Feel things (with a capital F, you’ll notice). But I Felt Skylar’s emotional journey. By the time I finished the epilogue, I felt like I could breathe freely for the first time in a while. I hadn’t noticed how the book had slowly, slowly clenched me up during the second half, only to have the tension released with something so banal as a washed face and a much-needed trip to the toilet.

It was a bittersweet release, however, because the reader knows that Skyler’s relief is only temporary. The depression will come again, and they’ll have to fight again. And again.

Luna Tibling has a fantastic voice. Very clean and easy to read. This was the main reason I was game to continue reading through the slightly slow middle. Even though it seemed (at the time) like there wasn’t much plot happening, it was still enjoyable to read about the characters.

They are an extremely visual story teller. The reader is transported into the scene, right into Skylar’s shoes.

…the world maintains its obscene indifference – trees dance in the breeze, birds sing, people go on their merry way, every object in my room just stands there, rigid as ever, watching me suffer…

How I Found Ariana – Chapter 14

The fact that Tibling is a poet probably helps with voice, sentence structure, and readability. I’m no big reader of poetry, but even I enjoyed the verses included throughout the story. For some reason, the one about the streetlights was my favorite. Again, I’m no poet, so I couldn’t say exactly why I liked that one. But it was certainly my favorite.

This was not my usual type of book, but it’s one that I’m glad I experienced.

What did you think about How I Found Ariana? Let me know in the comments! And don’t forget to check out my other reviews here.