Okay, I know I said Rose was my favorite companion, but honestly Donna is kind of my favorite, too! I loved Rose because of the adventure, the romance, and the drama. She was my first love. But Donna – oh man. Strictly speaking in terms of characterization, Donna had it in spades. And her relationship with the Doctor was platonic gold. It’s hard to find a straight male/female pairing that clicks so well as friends without ever bothering with good old fashioned sexual tension. We were never meant to ship them, and so we didn’t. And yet they were as close as any two characters could ever be.

Rose may have been 10’s true love, but Donna was his best mate. And it was beautiful to watch.

Plus, it didn’t hurt that this was peak Doctor Who writing. This was before a bloated budget started watering down the plots. This season has far and away the highest quality episodes. There isn’t a single dud, and it has most of my favorite episodes: Partners in Crime, the two-parter in the Library, The Unicorn and the Wasp, Midnight, and Turn Left. Oh my god, and the Ood! How could I forget the Ood-Sphere?

Plus this is the season where we get a little closure on… well, I won’t spoil it for any nutter that hasn’t actually seen the show yet. And oh my god, Wilf! The series finale with Wilf was absolutely beautiful. There couldn’t have been a better, cleverer, more heartbreaking way to send off my favorite Doctor.

But this post is about Donna as a companion, so let’s get to it.

Donna’s character arc is a beautiful thing to behold. (Beware of a couple of spoilers for how things ended with Donna. But honestly, have you really not seen the show yet??)

She starts out as a loud mouthed, empty headed, spoiled, entitled, temp. I’m not gonna lie, she was a little annoying right at first. Very loud.

But very early on, the writers establish that she is kind and compassionate underneath. She makes her first appearance immediately after this tear jerker at the end of season two: 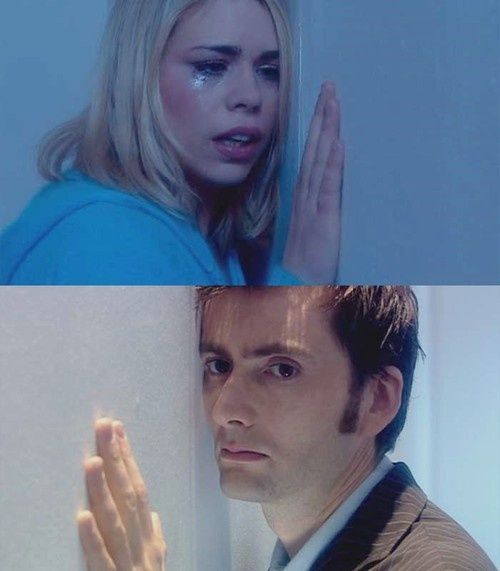 So though her first instinct was to be accusatory and mean to the Doctor (who she though had kidnapped her). But once she understood that he was grieving (and not an antagonist, lol), she gives her first hint that she sees the Doctor’s pain and wants to help him. She tries to ask about Rose, but he steam rollers over her and changes the subject. It’s a very short moment, only a couple of seconds. But it’s little things like this that build a strong character foundation. 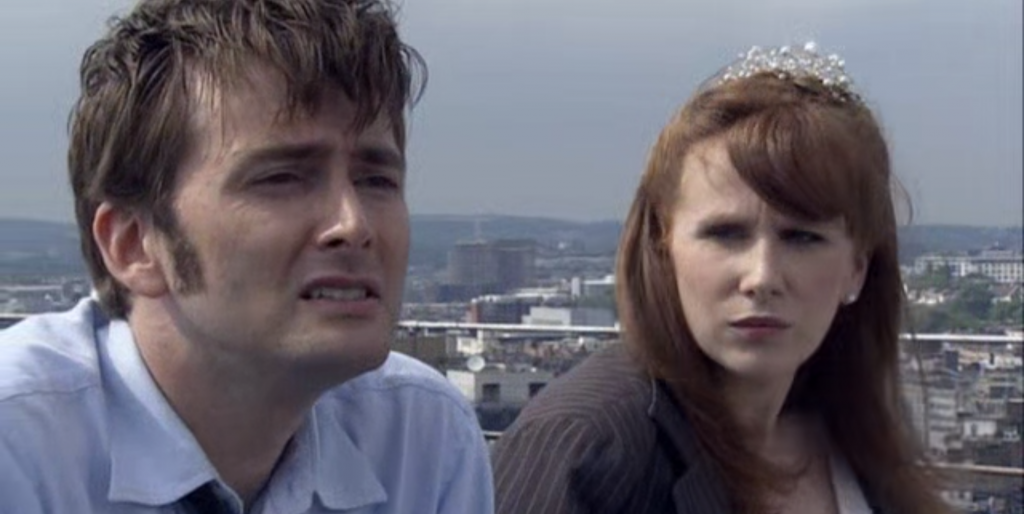 In S04E01 Partners in Crime, she makes a splashing return. This episode really sets the tone for their relationship moving forward. And it can all be summed up in one clip:

I mean… Whoever decided to make the legendary Catherine Tate a companion effing knocked it out of the park. Her comedic timing is gold. And her acting chops are never to be doubted. Her ability do display grief, sadness, anger, and fear are just as stellar as her comedy chops. At she gets a chance to run the whole gamut of emotions during this roller coaster of a season.

During the course of the season, Donna encountered impossible choices

The Wisdom of a Temp

I this episode, she says something extraordinarily profound, or so I thought. It certainly has stuck with me for years.

“I thought you were gonna travel the world?” the Doctor asks her.

Easier said than done. It’s like I had that one day with you and I was gonna change. I was gonna do so much. And then I woke up the next morning, same old life. It’s like you were never there. And I tried. I did try. I went to Egypt. I was gonna go barefoot and everything. And then it’s all bus trips and guide books and don’t drink the water and two weeks later you’re back at home.

It’s humbling to think of it like that. Adventure isn’t what you expect. It’s not like you see in the movies or the travel brochures. It’s an attitude, one that Donna is still struggling to develop. And she meant this all as a regret that she let the Doctor leave her behind before, but I took it a little differently. Combined with one of the Doctor’s perspectives from S02E13:

Here you are, living your life day after day. The one adventure I can never have.

But when she started living her life differently day to day, looking for trouble (and the Doctor), it changed everything for her.

You Need Someone to Stop You

This was a regular theme during Donna’s episodes, as clearly illustrated by one of my favorite episodes, S04E11 Turn Left. Donna is always going on about how she is just a temp. Nothing special. It’s a part of her characterization. Her loudness, her brash rudeness, it all stems from her poor self esteem: I’m just a temp. I’m nobody.

But of course that isn’t true. Time and time again, she saves people’s lives through compassion alone. She stops the Doctor from going too far and killing himself along with Racnoss, the Spider Queen. She makes him go back to save someone – anyone – from Pompei. On Messaline, she convinced the Doctor to open up to his daughter, Jenny.

And in the special episode The Waters of Mars, we see exactly what happens when the Doctor doesn’t have someone to stop him. To tell him he’s not all powerful, that he’s fallible. To tell him he’s wrong and he needs to stop.

Stripping Away the Bravado

During Donna’s travels with the Doctor, she encountered not only adventure and beauty, but she saw sadness, cruelty, and impossible choices. These experiences helped tear away the brash walls she’d constructed around herself. During the eruption of Vesuvius, she can’t understand how the Doctor can be so cold and leave everyone in Pompeii to die. She tries to help save a child, but his mother takes him away. She begs people to evacuate, but she is powerless. They don’t listen. She begs the Doctor to do something, anything to save someone. Just one person. Save one life. Please.

That bit always gets a few tears out of me.

On the Ood-Sphere, the Doctor helps Donna hear the Ood-Song, but she can’t handle it. It’s too sad. “Take it away,” she says. “I can’t bear it. I’m sorry. But you can still hear it?”

“All the time,” the Doctor answers. 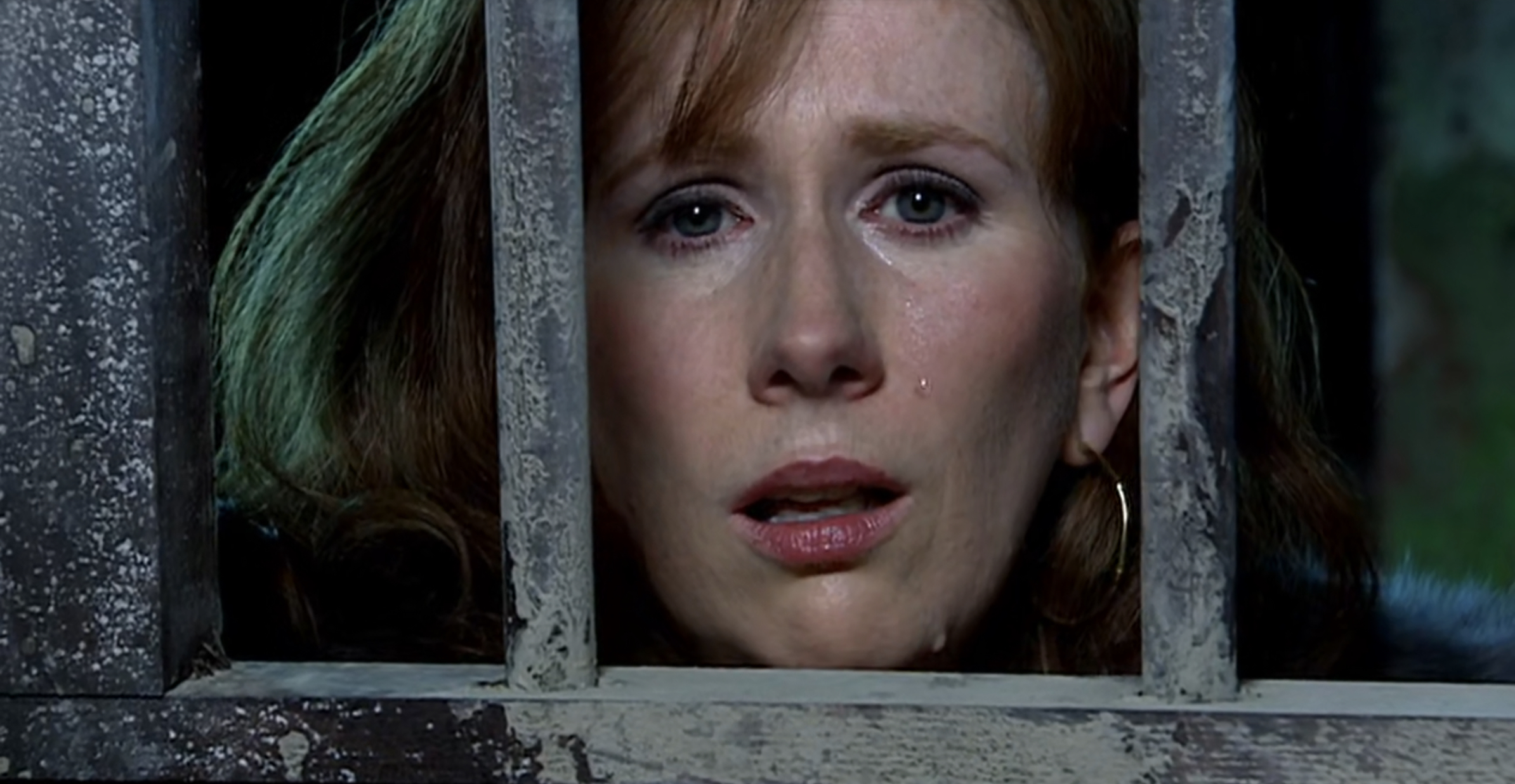 In The Forest of the Dead, Donna has to deal with having her children taken away from her. They aren’t real, but they feel real to her.

And in Turn Left, she has to make the ultimate sacrifice on faith alone.

By the time they come to the Journey’s End, she has stopped relying on walls to protect herself. She no longer lashes out at people, but she continues to doubt herself. Just a temp, she says.

Until the metacrisis, of course. At which point she starts bragging about being a temp. “Did I ever tell you? Best temp in Chiswick. 100 words per minute!”

So for the writers to pull the rug out from under us the way they did? It was a real blow. They undid all her character development in one fell swoop at the last minute. Usually I’d object to such treatment, but in this case it worked. It was heartbreaking but bittersweet. And it was right for the story.

And fortunately we got to see a few episodes later that she got her happy ending after all.

Anybody else love the Graham Norton Show? I don’t know these actors of course, but clips like these make me like to think they’re best friends in real life, too. In my head, the Doctor and Donna will be mates for life.

On a completely different train of thought…

Before I wrap this up, I’d like to share a little about one of my all time favorite episodes of Doctor Who: S04E10 Midnight. Some people love Blink and Vincent and the Doctor, but Midnight is my all time favorite. ALL TIME favorite. Donna had almost no screen time in this episode, but it took place during her season so I’m going to talk about it here.

The writing for this episode was absolutely killer. I mean, standing ovation from me, Russell T. Davies. For real.

To successfully have the monster simply be the fear of panicking humans? And to do it so well, I just can’t even. If you’re a writer, and you haven’t watched Doctor who, then at least watch this one episode. Pay attention to how this dialogue-heavy episode rounds out nearly 10 one-off characters with distinct, deep characterizations. They begin as cocky, self assured, complacent, relaxed – academics and families on vacation. And slowly we get so see how all of them change – simply due to rising panic in the face of an unknown danger.

I’m not going to go on and on here, but I just had to give it a shout out. If you like, just watch these two clips from the end of the episode. It’s horror done right, and that’s a hill I’m willing to die on.