I’m sure I’m not the only one out there who binged watched Netflix’s Bridgerton recently. I just finished my watch through last night, and there was a quote from Lady Featherington in the final episode of season two that really intrigued me.

Beware of Featherington spoilers during this entire article! I don’t talk at all about the main plot line (the Viscount and the Sharmas), but I go into great detail about the Featheringtons subplot. 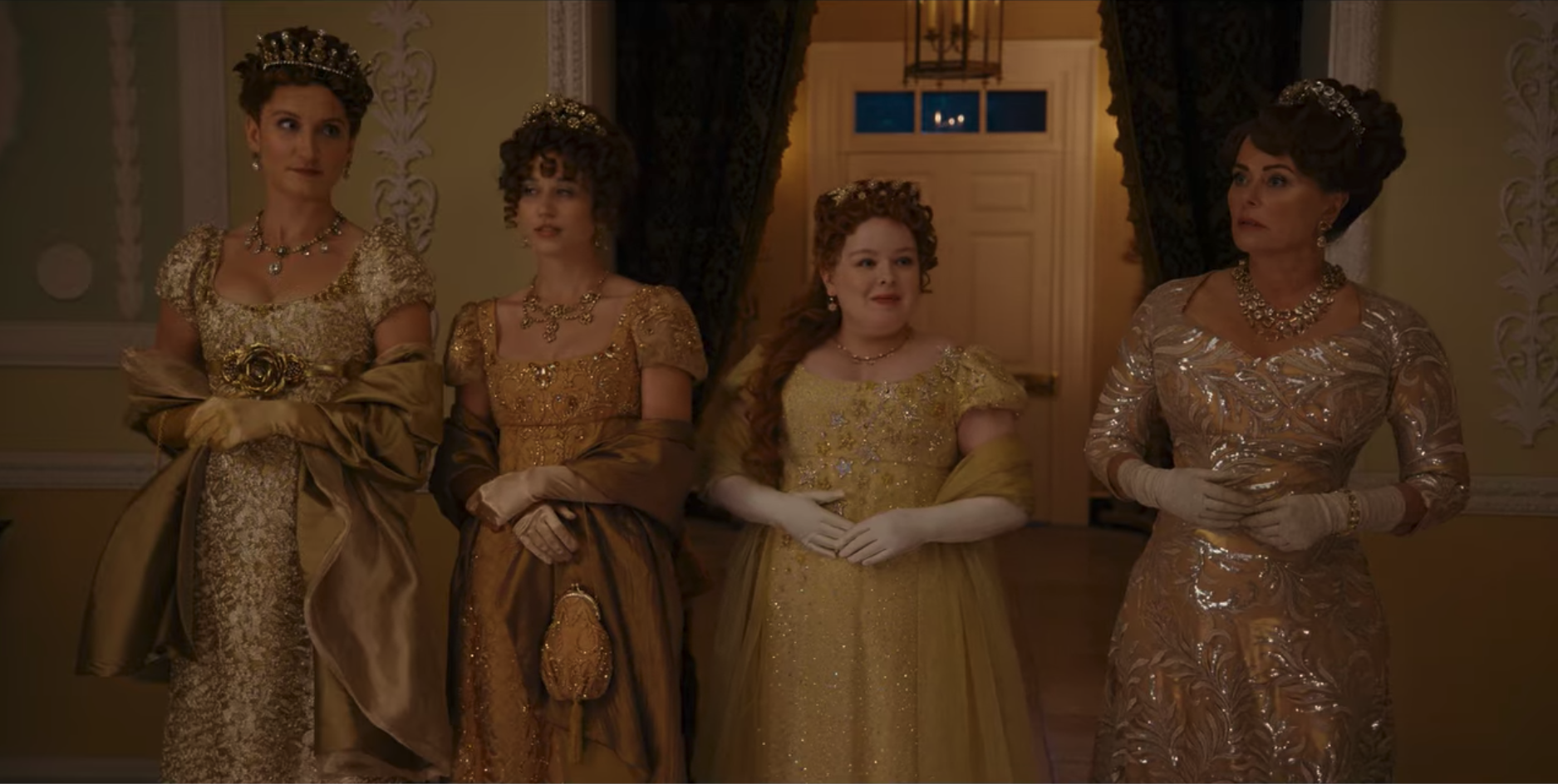 When Lord Featherington calls her cruel, she responds in her best mom-voice:

I am a mother.

This doesn’t seem like much out of context. In fact, just knowing those two lines: “You are cruel.” “I am a mother.” That right there feels like an honest to goodness mic drop moment.

But if you take into account Lady Featherington’s actions throughout the season, suddenly that line becomes a little… gray. Which is FANTASTIC. I love complex characters.

First off, I’d like to make the disclaimer that I have not read the Bridgerton books by Julia Quinn. They are very popular and have excellent reviews, so I’m sure they’re just as good as the show makes them out to be. Unfortunately, though I enjoy romance books, I don’t love them enough to read the books now that I know the plot (having watched the show). And I don’t care enough to find out what happens next. My TBR pile is just too long, lol.

But I do enjoy the show, and season 2 was just as good as season 1. It employed an enemies to lovers trope (as opposed to the fake relationship trope of season 1). Those are two of my favorites. But I’m not here to talk about the main romance. I’m here to talk about Lady Featherington – specifically the Netflix version.

First of all, the Featheringtons are not my favorite plot line. The characters rub me the wrong way – all of them. Even Penelope, though she is by far my favorite one. They all come off as self serving, back stabbing, and two faced. Even Penelope.

Just… I have to quick be a bit more clear about Penelope. She is 100% just as bad as the rest of her family. She acts all sweet, proper, and innocent, but she has made her path by ruining everyone around her, one at a time. Even her own best friend, Eloise. That is why she rubs me the wrong way. Okay, back to the point.

Though it wasn’t my favorite sub plot, Lord and Lady Featherington’s descent into evil was fascinating to watch. They both showed their true colors as they consistently manipulated the people around them, lied, and even swindled and stole their way to the top.

The Lady of the House

Lord Featherington was just… a sneak. That’s all there was to him. Which is fine. We didn’t see much of the result of his swindling in this season, but perhaps we’ll see more of it next season. And that’s an odd choice – maybe it was handled better in the books. But their scheme of getting investors for their fraudulent mines didn’t have any effect on the main plot line, that of the Viscount and Lady Sharma. Again, that’s probably just a Netflix decision to try and keep everyone relevant throughout all of the seasons.

But Lady Featherington’s character arc was fascinating to watch. It was her idea to lie about the profitability of the mines. It was her idea to take the investor’s money even though there was nothing to invest in. And all because she was tired of being the least-liked family in society. She wanted money and invitations. And she thought it was a jolly idea to steal it from the families she so desperately wanted to impress.

And then, when she did have enough money, she decided the right course of action was not to be conservative or invest the money, but rather to spend it and show off. She threw a lavish ball, everything in gold, to make herself look important in front of everybody (using their money).

And all of this is hilarious because people don’t like them because they’re shit people. The daughters are unlikeable, and so is the mother.

For the record, this is the part where Lady Featherington is baby talking her daughter as she plans to whore her up to try and snag the attention of Lord Featherington. Real top-notch lady, right here.

But then Lord Featherington makes a fatal mistake: he reveals that he doesn’t really care much about the lady’s daughters. He doesn’t dislike them necessarily, but he’s not too concerned about them. And this brings out the mama bear in Lady Featherington.

She then takes most of the money, screws him over, and sends him on his way, promising to blame him for all the money stolen from the other families. She does not intend to return any amount of money, but plans to keep it to live on.

All in all, Lady Featherington is one evil bitch. I mean, come on! Shit decision after shit decision. Anybody else cringe as she forced the betrothal between Lord Featherington and her daughter? What the heck was that?? No regrets, she just manipulates, schemes, and throws anybody under the bus. She just does not care about anyone besides herself and her daughters.

But she still gets her mic drop, doesn’t she? Being the badass mama bear absolutely does not excuse any of her crimes and manipulations. But I loved that conclusion to her story. She was willing to go to any lengths to take care of her family. And she doesn’t think there was anything wrong with what she did. 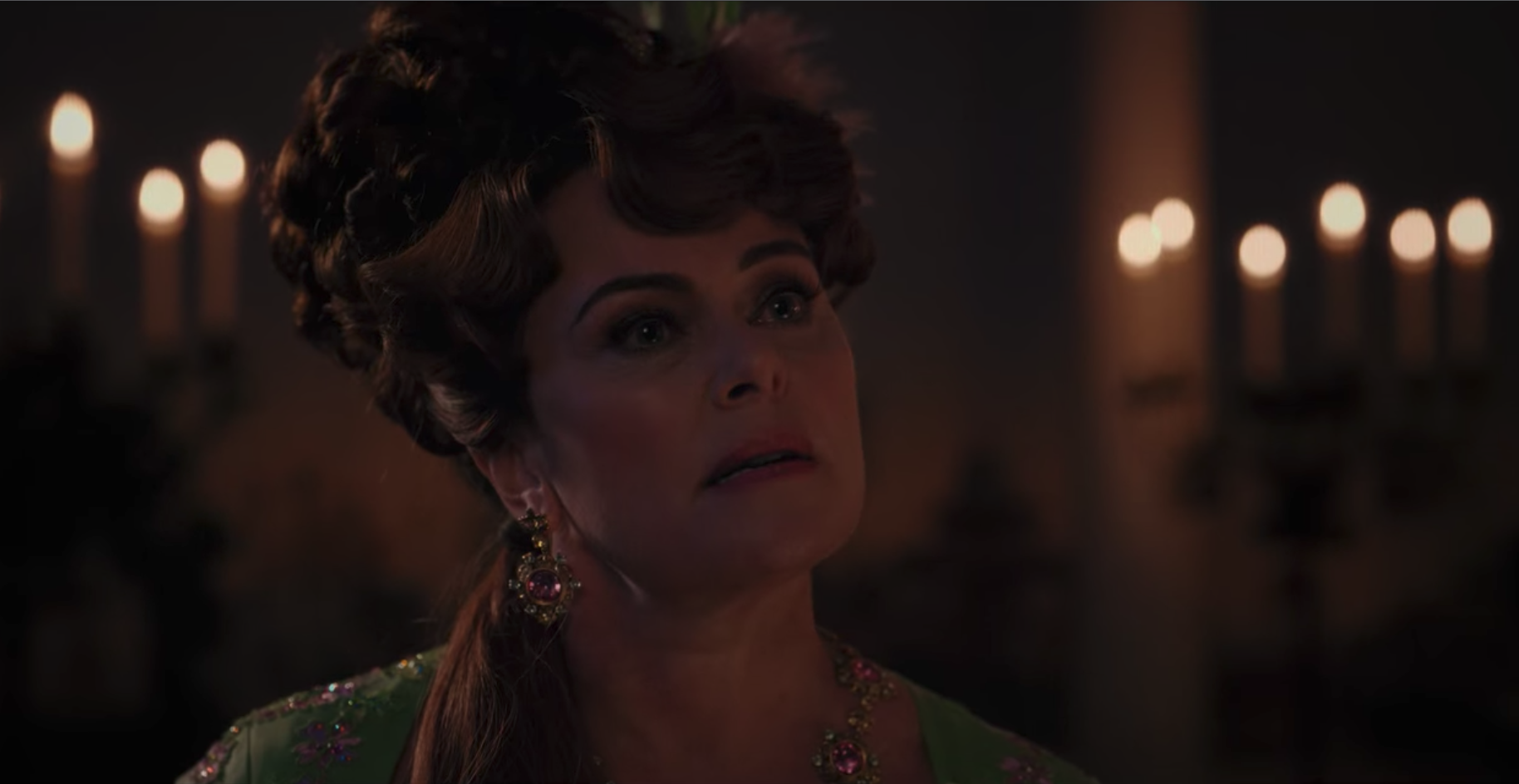 So even though I GREATLY dislike her, I have to appreciate this complex character that’s been created here, either by Netflix or by Quinn, I’m not sure. She is straight up a villain, but her villainous motivations are definitely not boring.

Just as a quick final thought, and leading directly from the previous discussion: This is one thing that I genuinely love about the Bridgerton series, at least the one on Netflix. Even though the main plot line follows the young lovers each season, the older generation (specifically the mothers and the Queen) are not by any means irrelevant. They are complex, strong characters, and I am here for it.