Who else here LOVED the movie, The Village (2004) by director M. Night Shyamalan? I am not a horror fan. Not even a little bit. So you may wonder why I loved this movie so much. Well that’s because it’s not a horror movie. It’s a romance masquerading as a horror movie. And I loooooove romance! And in particular, I loved the paring of Lucius and Ivy.

I could go on and on about the other magnificently complex characters in this movie, their motivations, and the fabulous delivery of emotional speeches by Lucius, Mr. Walker, and August Nicholson. (Not Shyamalan’s cameo speech in the guard shack, tho. That was a dumb, shoehorned in vanity role and we all know it.)

But what I want to talk about in this post is Lucius and Ivy and the way in which their attachment was shown throughout the movie. Shyamalan used several of my favorite tools from the Writing Close toolbox. And since I love to dig way too deep into these things, let’s go at them one by one! 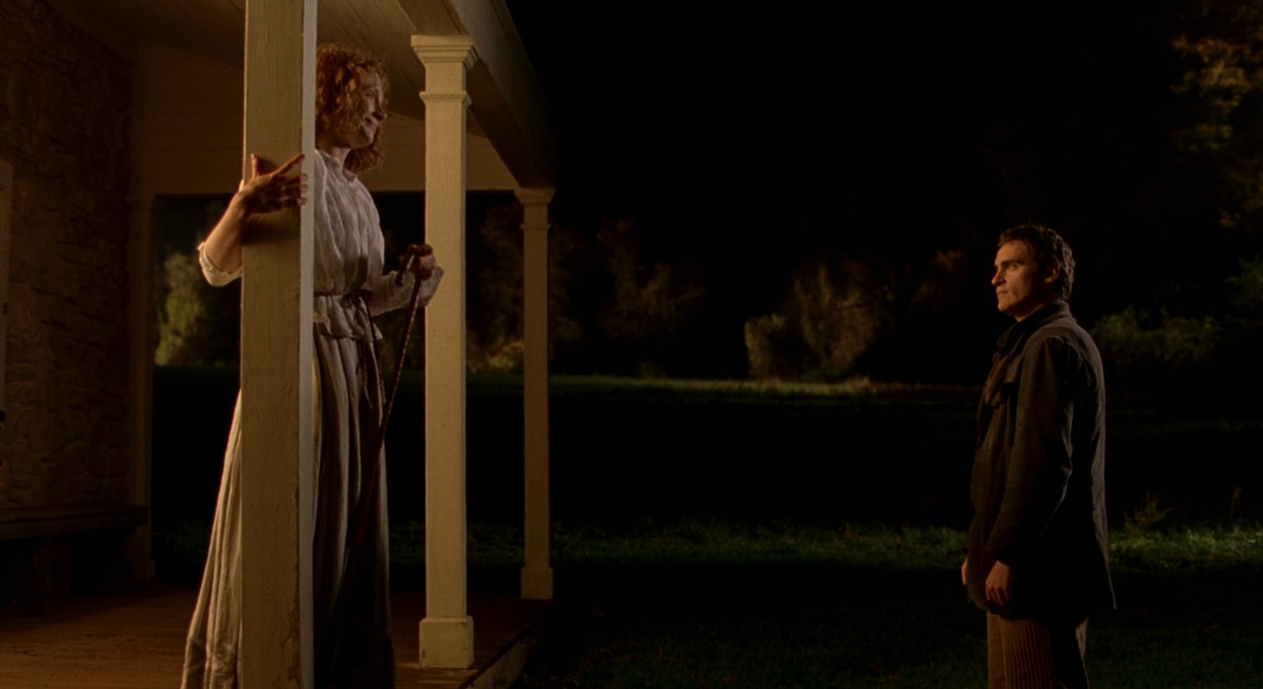 Shyamalan was really heavy handed with this particular tool, but that’s okay. It’s not something that can be ruined by talking about it (unlike character awareness). In fact, this becomes a major talking point on two separate occasions. First, when Ivy tells Lucius she knows why he refused her sister:

I know why you deny my sister. When I was younger, you used to hold my arm when I walked, and suddenly you stopped. One day, I even tripped in your presence and nearly fell… but still you did not hold me. Sometimes we don’t do things we want to do so that others won’t know we want to do them.

The second time came shortly after, when Lucius tries to express this new wisdom to his mother (and fumbles it – but that was excellent characterization as well!)

What nonsense are you saying? …What makes you think he has feelings for me?

He never touches you.

This was later illustrated at Kitty’s wedding, when Mrs. Hunt tried to shake Mr. Walker’s hand in the reception line. He shook everyone else’s hand in line, but he makes a point NOT to shake Mrs. Hunt’s. 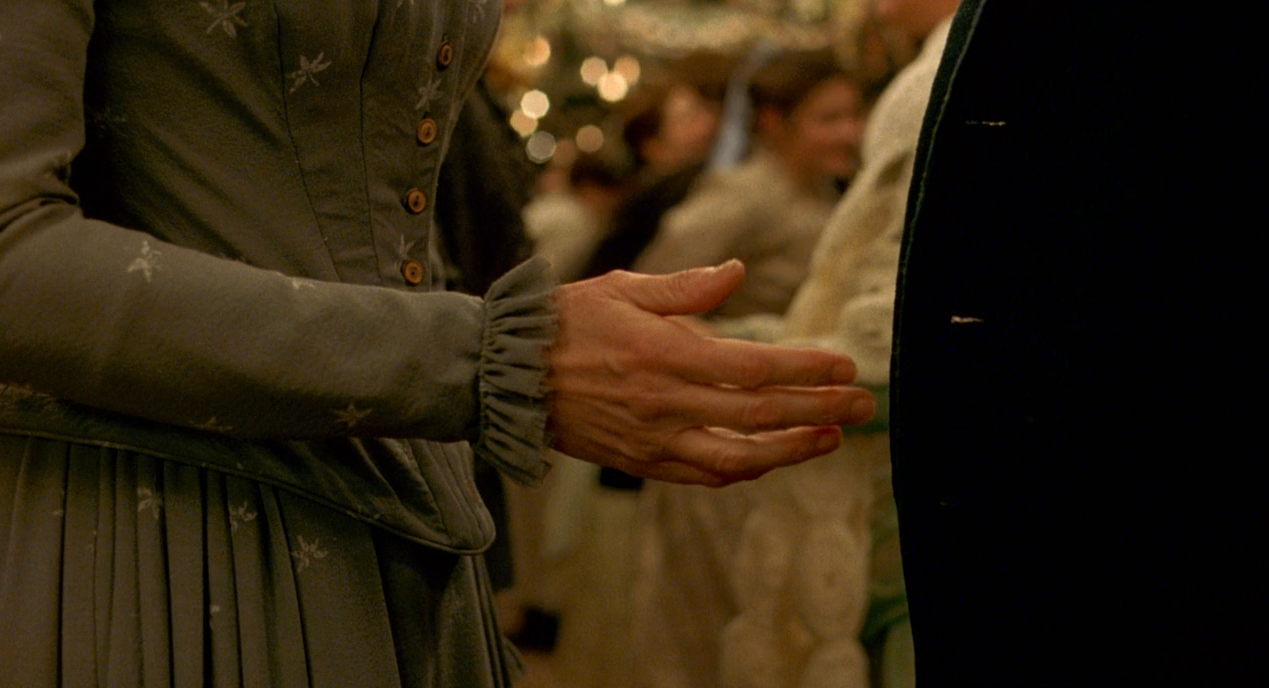 I said before that this method can’t be ruined by talking about it, but I’d like to point out that it was done very intentionally in these cases to prevent cheesiness and to create a very tightly connected plot. For Ivy and Lucius, the main romantic pairing, it is only used as backstory. It’s how they used to be. Ivy is bringing it up on purpose because she wants Lucius to know that she is aware of his feelings for her. Avoidance isn’t a super satisfying situation to be in romantically. It’s frustrating. We WANT them to touch, but they don’t. So for the main pairing, it’s told to us, not shown. We the audience don’t experience the frustration. In this case, “telling” is a much more effective tool than “showing.”

For the other pair, Mrs. Hunt and Mr. Walker, it is shown to us. Their romance was never going anywhere. We are meant to feel the bittersweet, unsatisfied nature of their relationship. So avoidance was the perfect tool to use. 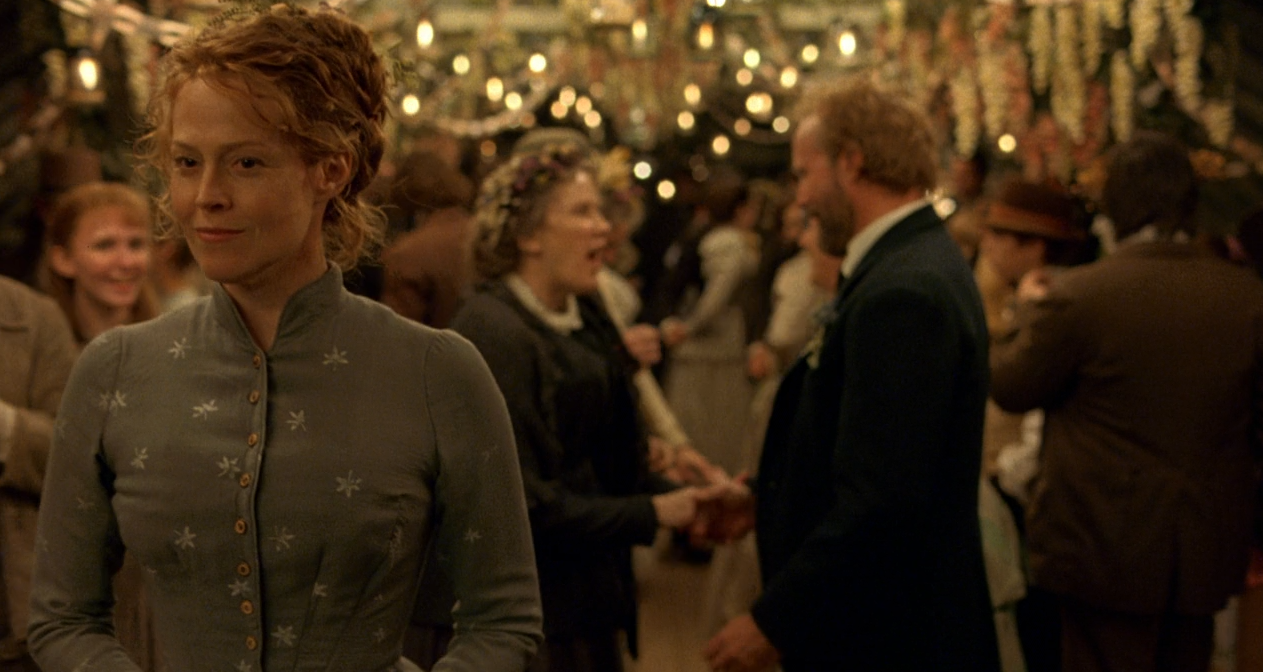 Additionally, because this method was brought up in several scenes throughout the movie, it connects those scenes together. One might even call it a motif.

Touching, of course, is the antithesis of avoidance. It is the most visual and concrete tool for showing closeness between two characters, and it works very well for Lucius and Ivy. After we’re told that Lucius avoids touching Ivy in order to hide his feelings for her, the fact that he continues through the rest of the movie touching her constantly and confidently really effing lands for the audience.

The first time is when the monsters invade the village, and Ivy waits for Lucius on the porch. Kitty begs her to shut the door. “He’s inside somewhere safe! Shut the door!” But Ivy refuses. She knows Lucius will come make sure she’s safe, and she won’t shut the door until he gets there. She holds her hand out into the darkness, and waits on faith alone that he will come for her. 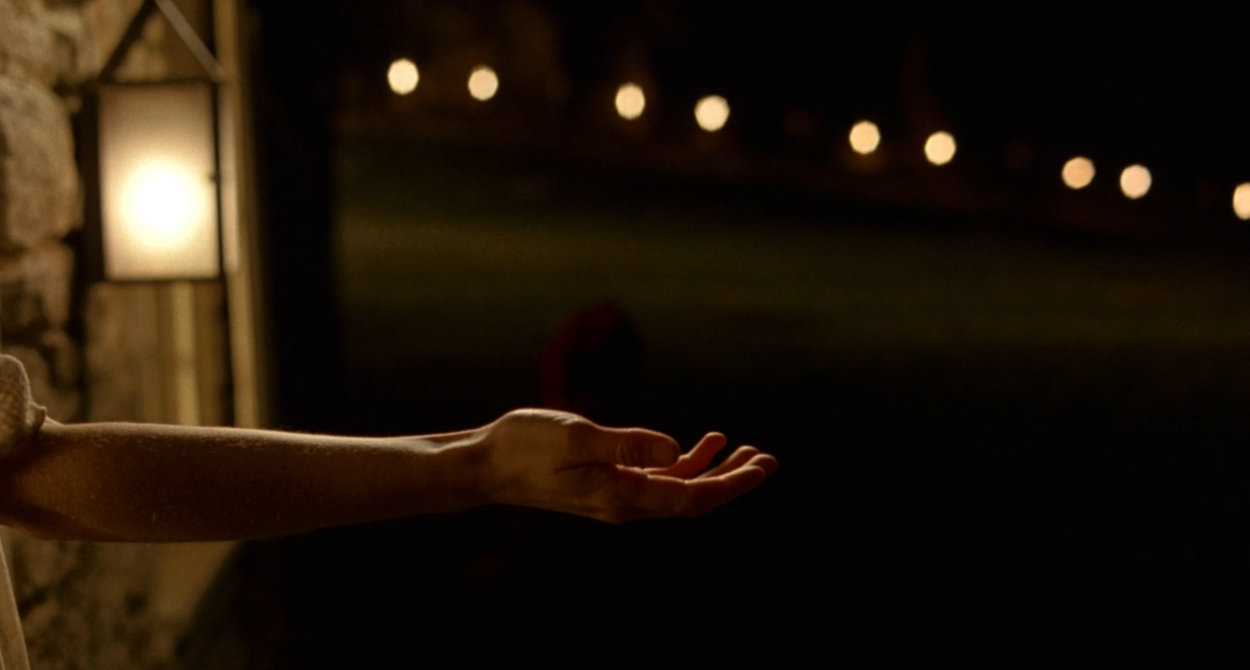 The moment he grabs her hand and yanks her inside, ugh. Chills.

Shyamalan really focused on the hand holding while they were in the shelter. Usually I would prefer to let touching be more subtle, but because of the avoidance motif already set up, the fact that Lucius starts taking her hand becomes a striking contrast to Mr. Walker’s treatment of Mrs. Hunt, and therefore shines brighter because of it. 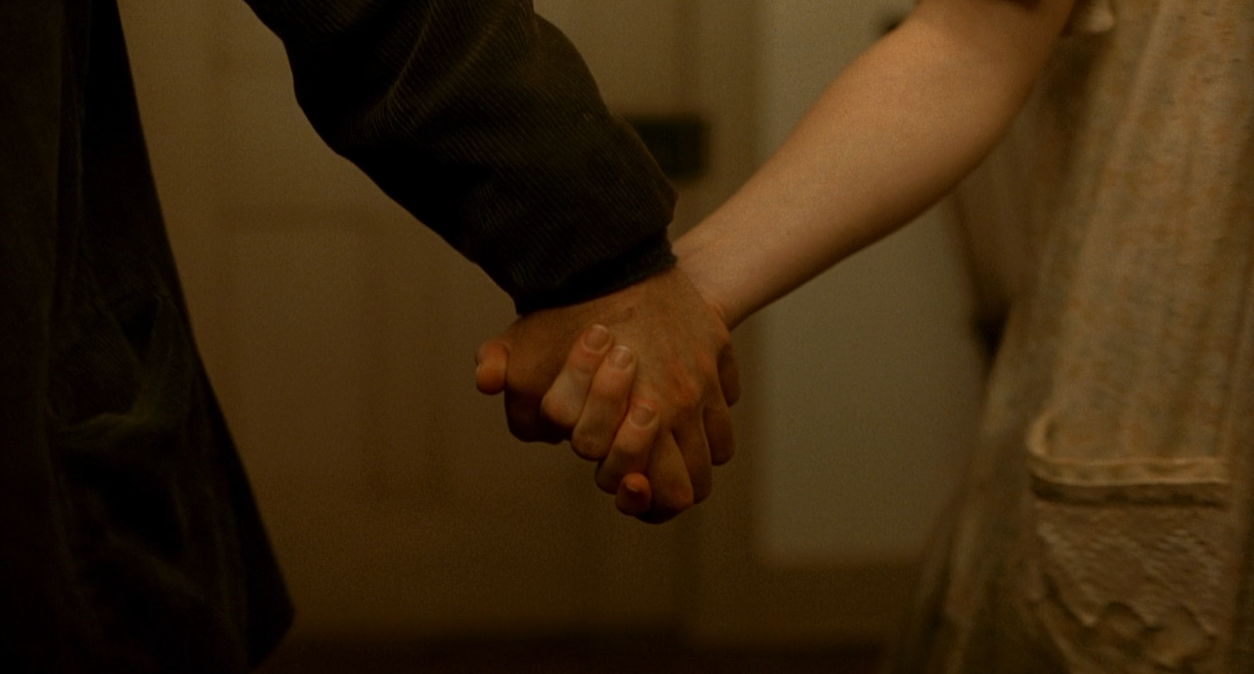 And they did it again at Kitty’s wedding. This could be seen as repetitive, and it probably would become so if they’d done it a third time, but doing it twice was just right. In this moment of fear and confusion, Ivy’s first instinct is to reach out and wait for Lucius to take her hand and guide her out. She puts her hand out knowing that Lucius will take it.

And Lucius doesn’t hesitate. He doesn’t care anymore who sees. He doesn’t wait for her father, her mother, her sisters, or one of her friends to help a blind woman get out of a panicked crowd. She’s reaching for him, so he takes her hand. And that leads beautifully to my next point:

This is one that is difficult to do right, but Shyamalan nails it. He doesn’t use it much, but it is very effective. In a bout of pure Anna-Insanity, I’m going to list them all.

Okay, phew. It’s a good thing they don’t get much chance to interact after that because the list would go on and on! When this much screen/script time is given to a romantic pairing, you know this isn’t just a horror movie.

Ah, my favorite tool! And it just so happens that Lucius and Ivy are my favorite romance trope as well: grumpy/sunshine. (Quiet and reserved counts as grumpy for the sake of the trope.) This one gets hammered in pretty hard as well, but it works. August says outright that Lucius doesn’t like to speak. When Lucius has something to say to the elders, he writes it down in advance before reading it aloud. 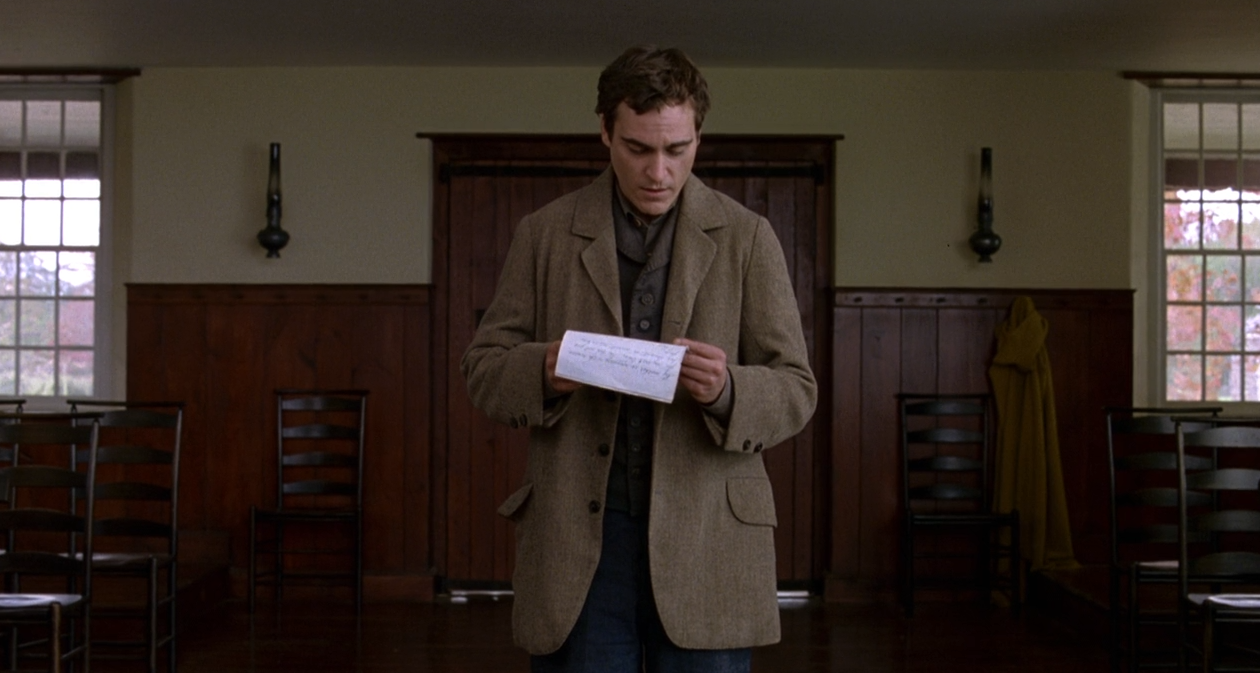 But when it’s just Ivy, Lucius goes on and on. He doesn’t even seem to realize he’s making an exception for her by speaking with abandon. Special attention is drawn to the moment on the porch where he scolds her for taking the lead. He gets very emotional, talking about things that scare him. And in the end they agree they will be married and have a satisfying kiss before fading to rocking chair. (Get it? Because it doesn’t fade to black when they kiss. The camera pans over to a rocking chair lol!) 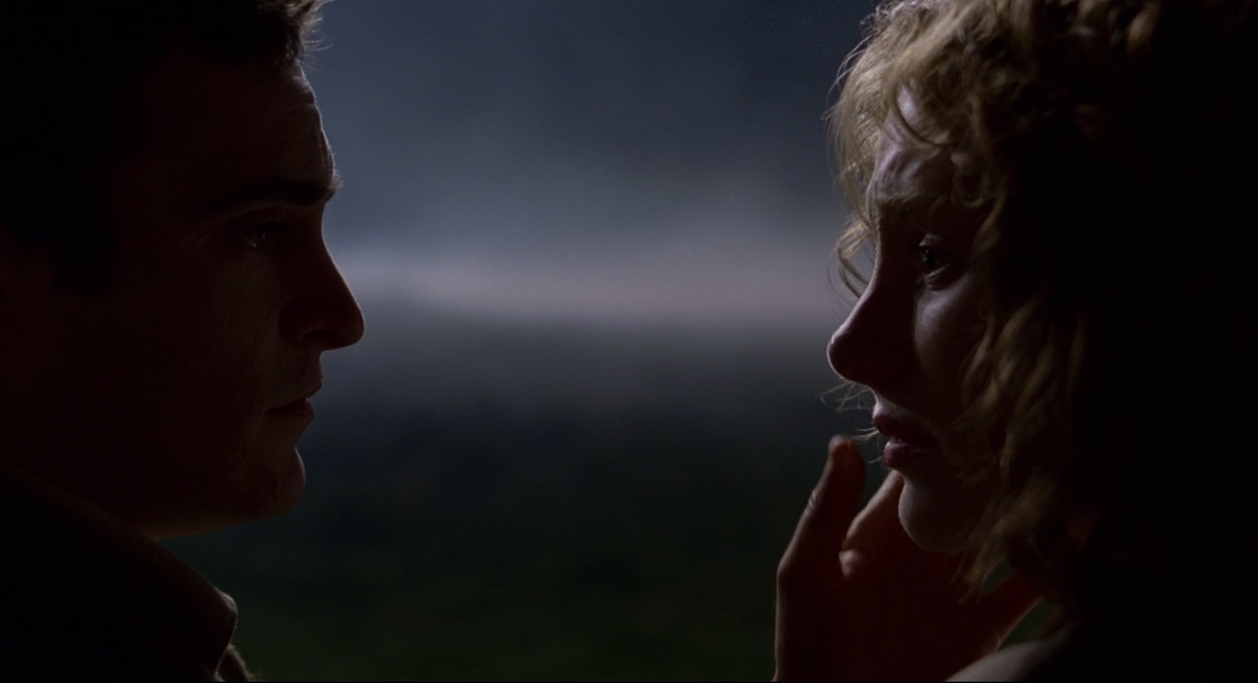 But even though this is The Big Moment, there are lots of other little examples that slide in under the radar, and these are just as important. When he asks if Ivy is angry that she cannot see, or talks about potential medicine to help Noah. Even when he tells Ivy she runs like a boy, that counts as making an exception by talking to her. He doesn’t talk to ANYONE except Ivy and his mother, despite being in many scenes with other characters. 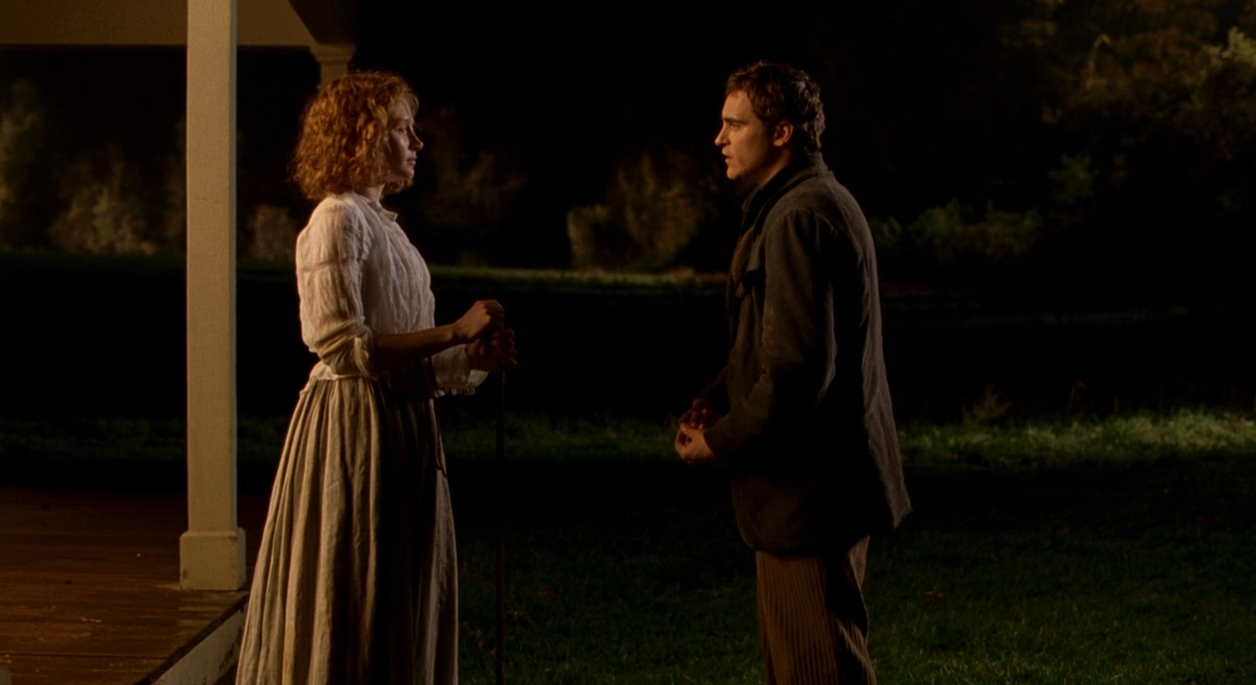 Holy shit… those are the only three conversations he has with Ivy. You run like a boy, aren’t you angry, yes I will dance with you at our wedding. Dang. That just goes to show how effective actions can be. He didn’t even have dialogue at Kitty’s wedding. But this makes sense as well. It is consistent. He only speaks when he is alone with Ivy. He is with her in many other scenes, but he doesn’t talk. Why? Because there are other characters present. In contrast, he has a brief scene alone with August. Lucius is helping August bring in firewood – presumably because he cares about August and wants to help him. But Lucius doesn’t speak a single word for the entire scene.

The only other person he speaks so openly with is his own mother, Mrs. Hunt. This is great characterization because we’re shown that there are only two people he really loves and feels comfortable with: his mother and his future wife.

A little goes a long way…

It’s amazing how well this romance is laid out in such a short time. At the halfway point, Lucius is taken out of the picture and Ivy must spend the rest of the movie working to save him. Of course this is when the secrets about the village begin to unravel. I believe the real star of the show here is how well all of the early scenes were connected to each other via touching vs not touching. Romance writers can learn a lot from this technique: keep the plot narrow, connected, and on theme.

What did you think of the romance of The Village ? Let me know in the comments below!