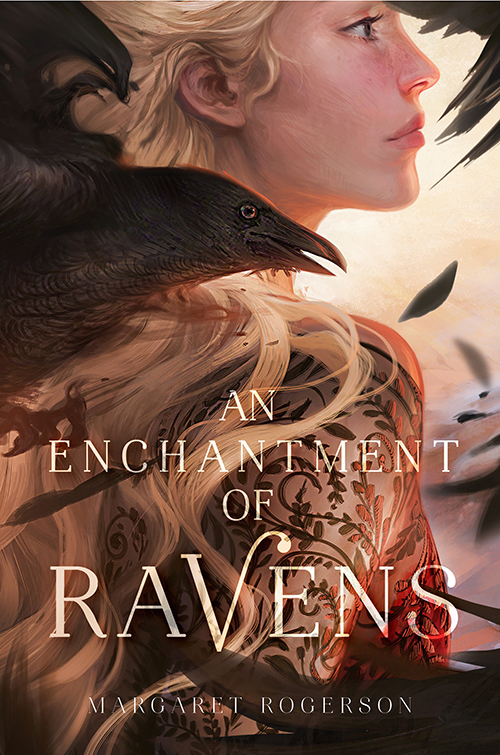 A lush and original fairy tale – literally. This romance follows Isobel into the magical world of the Fair Ones, where she is has to basically handle a bunch of immortal toddlers, and it’s kind of awesome.

I’m not gonna lie, I picked up this book because of the cover. Look at that beauty! I came across it on Pinterest as I collected fantasy book cover inspiration for Little Owl. This one is one of the top contenders for favorite.

An Enchantment of Ravens is available in libraries and bookstores everywhere. Read more reviews on Goodreads.

As usual, I listened to the audiobook for this one. I highly recommend it. The narrator does a fantastic job. My only (minor) gripe is that her voice for Rook (the love interest) was a little… I dunno. Posh? But considering he’s supposed to be faery royalty, I suppose it’s fitting. I personally don’t find that accent super attractive, so it very slightly damaged my interest in the romance subplot. But only very slightly. I think I would have heard him differently in my head, especially since he tended to be a little sarcastic and very charming.

But on the other OTHER hand, Rogerson did such a great job of making the Fair Ones feel extremely not-human, maybe their voicing was extra appropriate. More on that below.

So overall, I’d say the narration was a pro, not a con. Sometimes a narrator can straight up ruin a book, but that’s definitely not the case here.

As usual, let’s start with the positives!

First thing’s first, I love a great, lush voice! That’s one thing Rogerson does really, really well. I felt like I was bathing in the world of Whimsy and the Faery courts! Literally bathing in it. Lik, sun bathing, not washing-bathing. That sounds kind of gross… swimming? Yes! Swimming. That feels better.

The way Isobel talked about her paints, colors, and the details of the life she lived, it all felt so real. And she viewed the world around her with the eye of an artist, and it really showed. I had no trouble sinking right into it. Bravo.

Toward the end when Isobel was fairly beaten down and a little despairing, the lush voice did get a tad angsty. But only for a few pages and then it smoothed back into beauty.

The Fair Folk Themselves!

Oh. My. God. So I’m not super into the whole faery trope. I enjoyed the Court of Thorns and Roses series (okay, to be honest I loved Rhys. Oh my GOD did I love Rhys), but other than that I’m not super drawn to it. I’m not impressed with the usual portrayal of them as uber gorgeous, unnecessarily cruel and gory super-people.

But in An Enchantment of Ravens, the Fair Ones were NOT super-people. They weren’t human-like at all, and I was totally into it! It wasn’t just their unusual appearance underneath their glamours. It’s in their behavior, the way they talk to each other and treat Isobel. They seem clueless about the intricacies of humanity – things as simple as privacy, fatigue, and cooking. At one point, Isobel gets turned into a rabbit by a Fair One named Lark, who defends herself by saying, “I wouldn’t have lost her. I take care of my things!”

Lark straight up considered Isobel as a toy. She wasn’t being cruel or trying to hurt Isobel. She was just playing the way a child would play with a puppy.

But considering that viewpoint, that means Rook’s romantic interest in Isobel could pretty easily be equated to me dating my dog, Coconut.

I also loved that they didn’t just kill people/animals/each other just for funsies. There was a bit of gross-factor in that they ate rotten food (glamoured to look fresh), but there was no excessive gore. There was no cruelty for the sake of cruelty or psychotic behavior. I appreciated that.

Instead they were like entitled, over-powered toddlers that had never been told “no” in their lives. It was a refreshing take on the trope.

Isobel has a static character arc, which I always love. You don’t see it too often, but I enjoy it when I manage to find one. I won’t go too deep into it for fear of spoilers, but I LOVED that she held to her convictions through to the end. Way to be tough, gurl.

There weren’t too many cons here, but there was one big one that prevented me from giving this book five stars: the plot.

Or should I say, the utter lack of plot.

Things seemed to be going smoothly for the first third of the book. It was a little slow, but not in a bad way. We were strolling along, enjoying the scenery, and then bam! Exciting incident. Bam! big monster! Oh, a little romance. Fun! A whole court full of Fair Ones!

After a while, the plot did pick up again, and we raced along to the conclusion. The middle was slower, but it didn’t result in a DNF, so don’t let it stop you, either.

There was a moment near the end that I got very excited about. After a large encounter with the Big Bad Guy, followed by an exciting escape, Rook and Isobel take a quick breather. They discuss what they’re going to do next. Rook suggests that they can make for the Outer Lands. (I think? I’m not sure. As an audiobook listener, it’s hard to go back and double check names of places, especially when they’re only mentioned once or twice).

Oh, hell yes. Let’s go! We’ve had a great setup, I love that our lovers are together. They can go off and have adventures and be in love and LET’S GO ALREADY! The idea that we had only just started on this journey even made the boring time at the Spring Court seem just fine. That was still early in the book! We were just getting going!

But then… nope. “Let’s stay and fight.” And a couple of chapters later the book is over.

But damn, that “what if” could have been so great! If the book had a whole other part before the big finish to deepen it a little? Then it would have been a five stars for sure. I feel like I read a book with a whole middle ripped out — all because of that one off-hand suggestion that got shot down immediately.

I loved this book! It may not be a re-read, but I certainly did enjoy it while it lasted. What did you think of An Enchantment of Ravens? Let me know in the comments below! And don’t forget to check out my other reviews before you go!