As a self-proclaimed and incredibly loud feminist, you would think the Bechdel Test would be my bread and butter. My mantra. My tagline. But you’d be wrong. I actually greatly dislike what this test of female representation has become to the point where I get all riled up any time someone brings it up in the forums. Which is a lot.

I’m not making myself popular over here. It’s a problem, lol.

…the practicalities. Before I can go on any kind of rant, let’s have a quick overview of what the Bechdel Test even is. To quote wikipedia, it is “a measure of the representation of women in fiction. It asks whether a work features at least two women who talk to each other about something other than a man.”

It started out as a cartoon written by Alison Bechdel in 1985 in her comic strip, Dykes to Watch Out For: 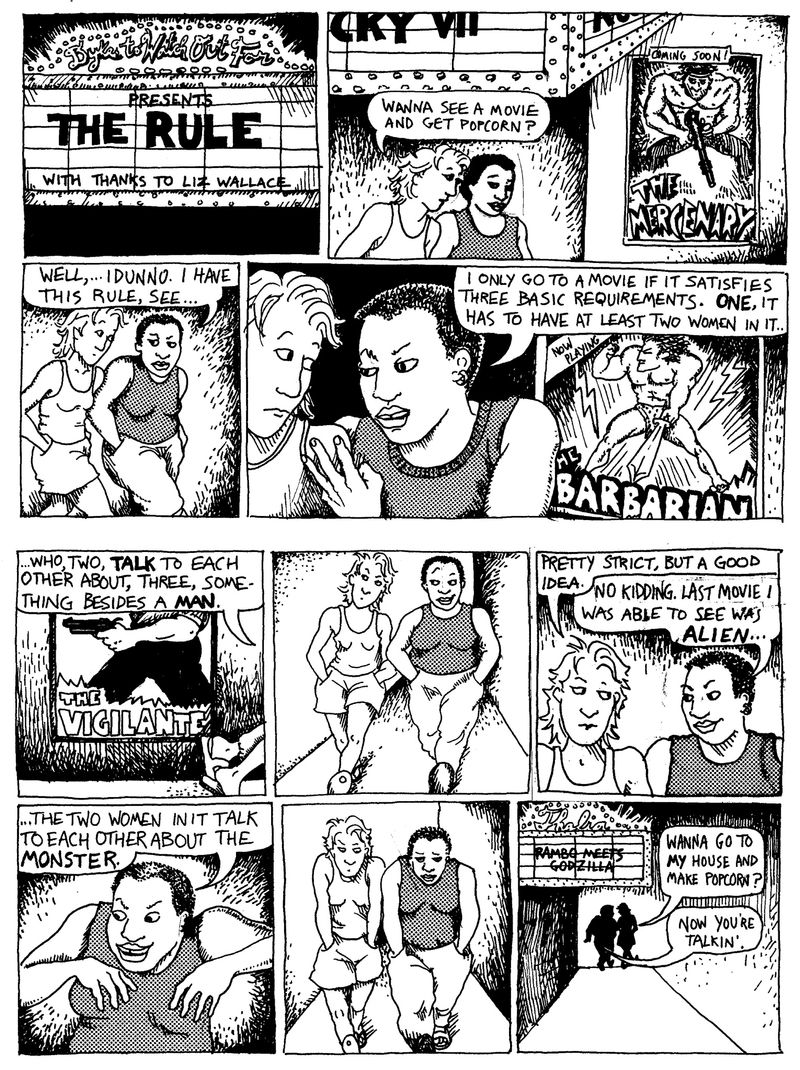 And that’s it. That’s what the Bechdel Test is. It’s a jab at the fact that, at the time, movies didn’t have enough female characters in general. That’s not what I’m here to rant about. In fact, I personally think this comic and its rise to notoriety are extremely important in the fight for gender equality over the past 4-ish decades.

To put this comic into context, let’s take a look at the box office hits from that time period. For the top 3 domestic box office, in the top billed cast (according to imdb), these movies had:

Dude, I guess 1982 was an especially feminist year, lol. For the record, these numbers may be slightly off. I just went through and counted on imdb. Occasionally I can’t tell if a foreign name is male or female, especially if there’s no picture.

Now, I haven’t seen about half of these movies, and for the rest it’s been too long to remember if any of the women talked to each other about something other than a male character. But considering the Bechdel Test is about the lack of female representation in films, then I’d say she was bang on the money. Damn.

So what does that mean for us today?

Don’t get me wrong. The Bechdel Test was extremely important in its time. It called out a serious inequality issue – 36 years ago. It is a major historical event in the fight for equality, but that’s it.

The Bechdel Test was never and will never be:

That’s right. You heard me. So put the Bechdel Test back in your pocket and dig a little deeper for why your female characters suck. Give them agency, motivation, goals, challenges to achieving those goals, and a distinct personality.

The one thing a strong female DOESN’T need, is another female around to validate her. If a particular work of fiction does have a large female cast, then great! But that is not a metric when deciding whether or not it is a good example of gender equality.

Here are the box office hits for the last 5 years:

Note: I went deeper into the Avengers movies because their cast list was so friggin huge.

Now, I can see the same trend as you. There is a marked improvement, but there are still more male cast members than female most of the time. I mean, we can’t count 1917, because that was set in a time and place where there simply weren’t any women: the front lines of WWI. And most of the rest is sequels or based on comics and franchises that were begun 50 years ago. Even so, movies are no longer the whole picture, are they?

Looking at the top 10 for Netflix right now:

Looking at the most modern and widely used medium for taking in tv and movies (especially since lockdown has been such a thing the last couple of years), it’s clear that gender equality is no longer an issue. And this isn’t even counting general favorites like Umbrella Academy, Firefly, Community, Parks and Rec, Vampire Diaries, The Crown, Buffy the Vampire Slayer, Avatar the Last Airbender, Bridgerton, Loki. The list goes on and on.

Of course this is just a small sample hastily taken, but even so. Can you really look at your recommendations in Netflix and say women are underrepresented in general?

I don’t think so.

And I’m willing to bet that new releases in books are following a similar trend in the past decade or more. In fact, likely thanks to the Bechdel test getting hauled out constantly, I have see a marked overcorrection in a lot of books I’ve dev edited in the last couple of years: a serious decline in male representation.

So why, I ask you. WHY does the Bechdel test STILL get dragged out every other day?

I’ll Tell You Why.

I’m about to say something very rude, and I’m sorry. But it needs to be said sometimes: People are quick to latch onto an easy, righteous rule that requires little effort to conform to.

It is so, so easy to see a quick, digestible truth, latch onto it, and dig no deeper. Someone brings out the Bechdel Test, and it makes so much sense. What a great, easy thing to make sure my book is woke as hell!

And that, ladies and gents, is you how get “a big work presentation” tacked onto a romance in an attempt to legitimize the female characterization. I’m convinced this is what killed the rom com. The writer needed something for the female character to talk about besides the male love interest/romance, and so they gave her something else to worry about, whether it fit or not. Isn’t It Romantic is a fantastic example of this.

This is also how romance subplots got vilified.

Because in the past, back in that list of movies from the 80s, one of those 3-ish women was a love interest. The rest were secretaries and the occasional seductress. Therefore people tried to distance their female characters from romance. If there’s no romance, it’s super easy to have your female characters talk about something other than a man.

And that’s also how you get jerks who claim that the romance in WW84 was a step backwards in the fight for feminism.

I’m still salty about that.

And that’s also how you get the morons complaining that Black Widow got a romance subplot in Age of Ultron… but weren’t bothered by the fact that Bruce Banner got one, too. (Hint, it was the same romance. They romanced each other. But Natalie has a vagina, so screw her, right?)

Okay, back to the point.

Let’s examine why the Bechdel Test may have value – and why that’s just plain not true anymore.

This also tends to take screen time and page space away from male characters, who have historically gotten way more than their fair share.

This is why it was important in the beginning, but all my overly detailed tables above prove that this is no longer an issue.

If we strip the gender away from the test (which is the ultimate goal of feminist equality), you get: two characters who talk about something besides another character. Suddenly it becomes basically impossible. Nearly everything in a story relates to one character or another.

What if it’s a romance between two women? If Jane talks to friend Barry about somebody besides her lover, Beatrice, does that mean the book passes the Bechdel test?

Speaking of queer positive books, what about a romance between two men? Is it really right to squeeze in a couple of women just so they can talk about something besides the male main characters?

Even in its actual goal of gender equality in casting, the Bechdel Test doesn’t solve anything!

The Bechdel Test is a metric for female representation in fiction. In this day and age, it is no longer relevant. We have female characters out the wazoo now, and you know it. It is not a way to gauge the quality of female characters, and forcing your characters to pass this test won’t fix anything. Whatever it is you’re trying to accomplish, having two female characters talk about something besides a man won’t fix it.

It’s time to relegate this particular test to the archives of important historical events where it belongs.

What’s your favorite movie/show/book that didn’t pass the Bechdel Test, and yet still had strong female characters that made you proud to have lady parts? Let me know in the comments below.

My favorites are The Lord of the Rings movies, Daughter of the Forest by Juliet Marillier, and These Broken Stars by Amie Kaufman and Meagan Spooner, and of course most of the Star Wars saga!