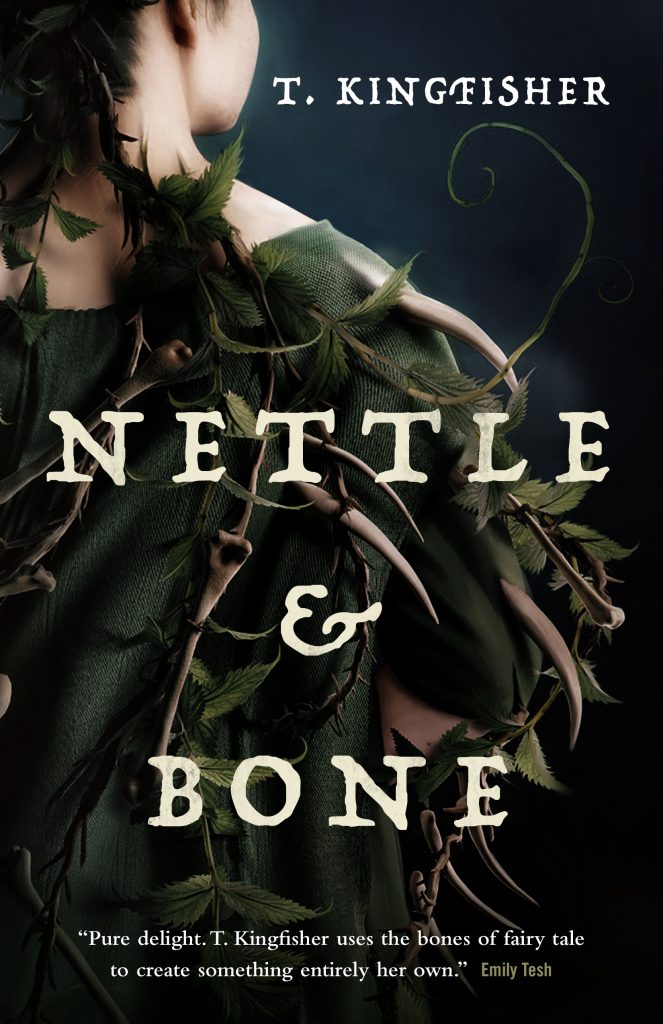 I came for the bone dog; I stayed for the demon chicken.

Well, I also stayed for the dust-wife, the lyrical voice, the imaginative characters, the small stakes (relatively speaking), the fantasy, the gray morals, and the fairy tale vibe. This book isn’t perfect, but it’s pretty damn good, folks.

Book-buying and book-reading are two different hobbies. I’ll admit I bought this one in a fit of the former. I went into a book store, and I was leaving with a book no matter what. I liked the feel of this one. By “feel” I mean the cover art, the gold-embossed dog skeleton on the hardback, the idea of three impossible tasks, and Marra’s determination to kill the handsome prince. This one didn’t feel like an epic fantasy. Rather it felt like a fairy tale, and I like to think that’s my default state.

So I brought it to the checkout counter and went home with it. It took me several months to get it read, lol. Don’t judge me! I have to set aside a lot of my free time for spinning and weaving and drawing and shit!

Nettle and Bone is available in libraries and bookstores everywhere. Read more reviews on Goodreads.

There are so many pros with this one. By far my favorite characters were… god most of them. The dust-wife, Agnes, Bonedog, the demon chicken. Oddly the main character, Marra, and her love interest, Fenris, were a little boring, but I’m willing to let that slide with such a tremendous cast otherwise.

And because of the huge amount of traveling in this book, there were also a ton of characters that we met only briefly. It can be hard to do that effectively, but Kingfisher nailed it. The Sister Apothecary, the drowning boy, Miss Margaret with the puppet strangling her, the disgraced princess ghost, Kania, and her mother the queen. Everyone felt so real, even though most of them only had a few pages to make themselves known before we left them behind. It’s a rare skill.

I really appreciated the sheer amount of originality in the world building in Nettle and Bone, especially when it comes to the magic of curses and blessings. They are such an everyday occurrence, and I kind of wish the real world was really that magical. The thief wheel was horrendous. Agnes’s affinity for curses and her determination to make them as nice as possible was entertaining for sure. I would have liked to know more about how the dust-wife’s magic worked, but I suppose that’s just the nature of her characterization. Her magic isn’t something to be understood by people who don’t possess it. Even that is a hallmark of good world building. It’s okay to not understand how things work, to not have every little skill explained.

I mentioned this in the first little bit, and I just wanted to do a quick callback to it. By small stakes I don’t mean killing a king or justice for abused wives is small potatoes. It’s a big deal. But I did greatly enjoy that it’s not “save the entire kingdom” or “the world is ending” or “everyone’s going to die” or “be enslaved” or “insert planet-killing-calamity-here.”

It’s refreshing that Marra just wanted to save one woman: her sister. And of course her sister’s children. It was just coincidence that her shitty husband happened to be royalty. Marra didn’t want to kill a king. She just wanted to kill one specific man because he was an evil human person.

Literally. The chicken was damned.

“She’s got a demon in her,” said the dust-wife. “It’d be rude to leave her for the neighbors to deal with.”

As a Certified Crazy Chicken Lady, I 100% approve of the demon chicken. I even sat with my own chickens to read the last few chapters this morning. 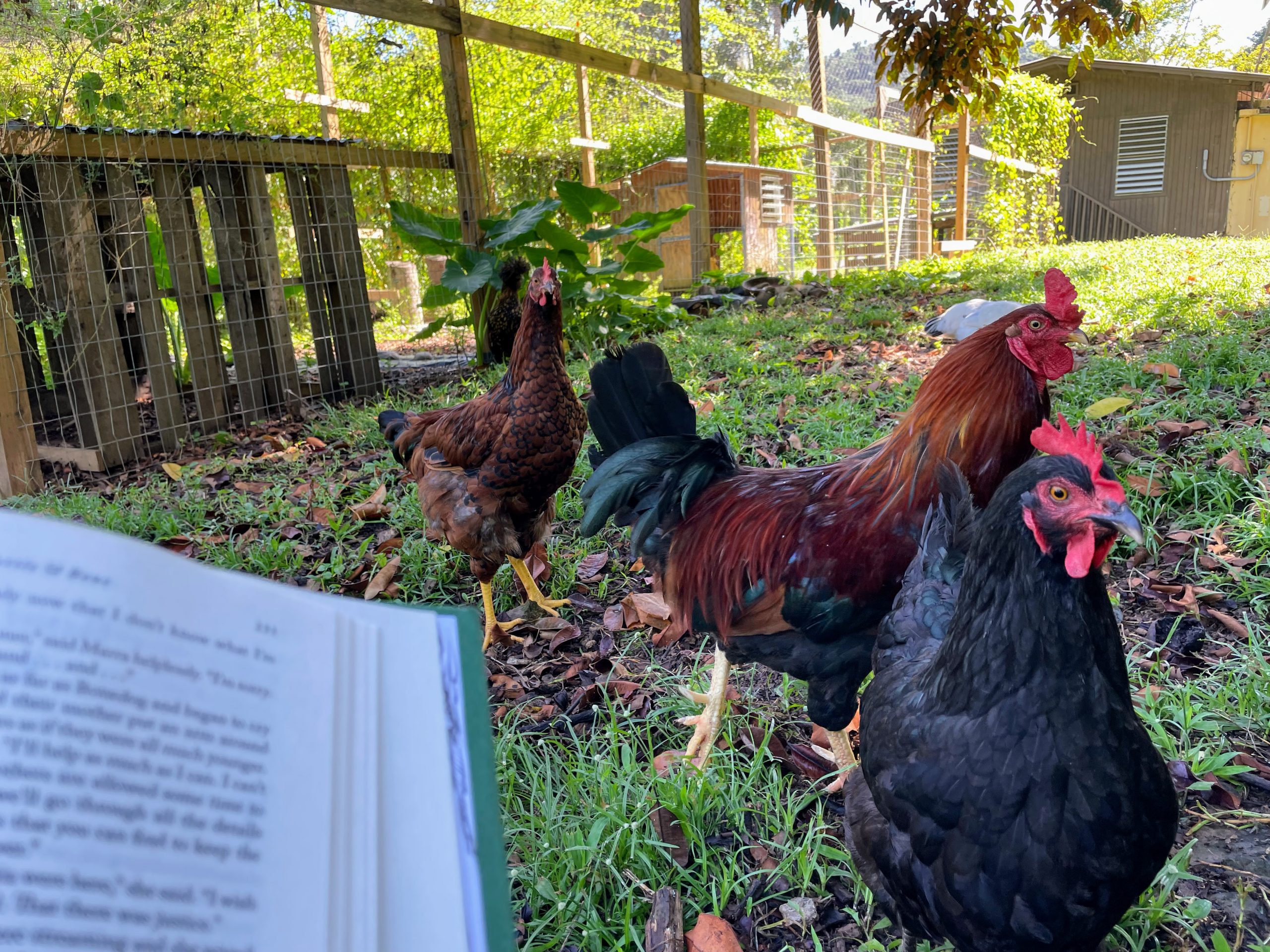 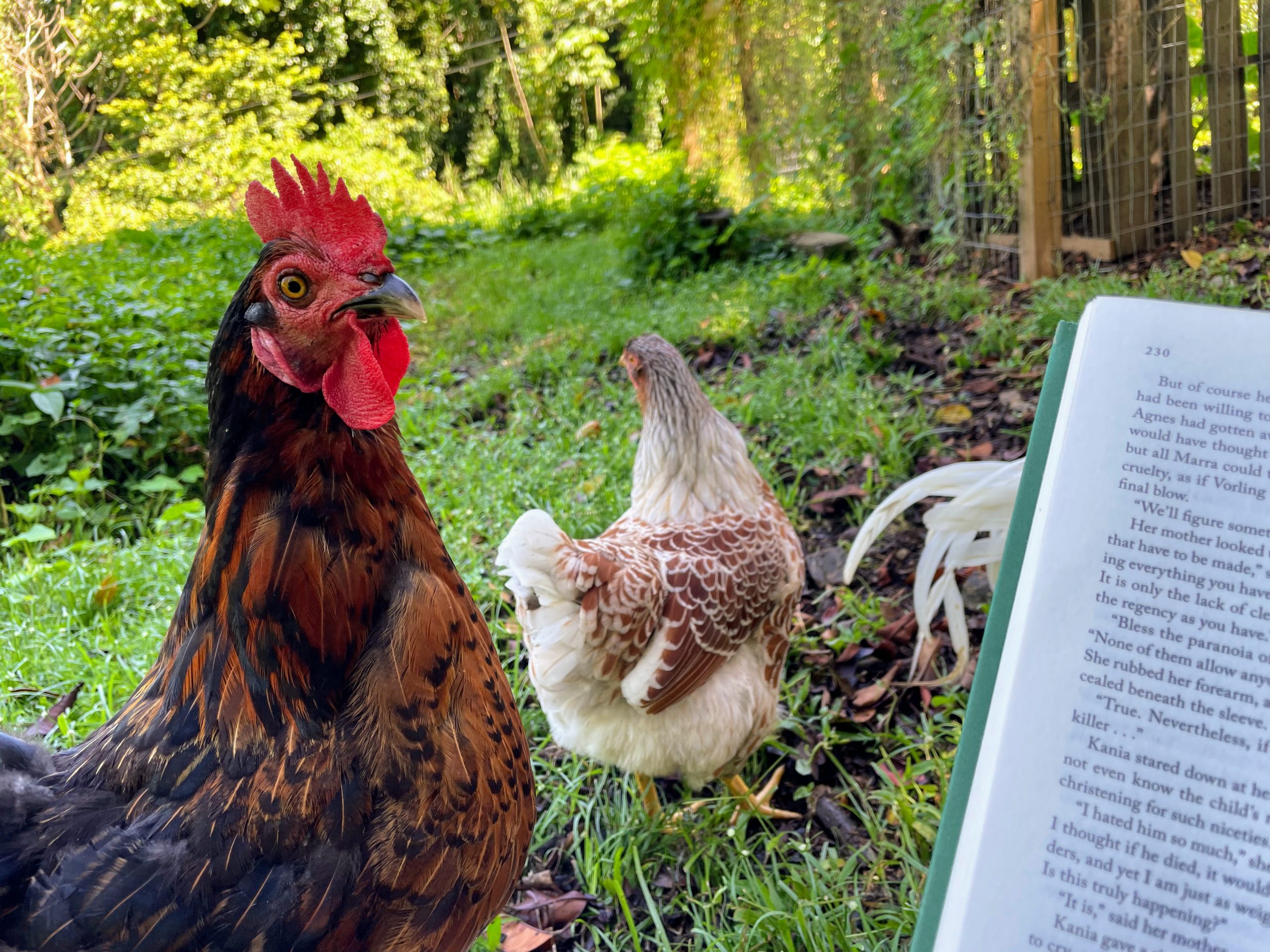 “You named the chicken.”

“Well, of course! Doesn’t your chicken have a name?”

The dust-wife looked at the brown hen, who glared back. “First of all, no, and second of all, she’s got a demon in her, so I would be naming the demon, which already has a true name. I am not going to go around naming demons. It gives them ideas.”

I’m not even sorry. This whole section is dedicated to the demon chicken! One more quote!

The brown hen cast a molten shadow on the ceiling, crowned with horns.

“So that bird really is a demon,” said Fenris, eyeing the shadow.

“Of course she is. Why would I lie about something that ridiculous?”

I could go on and on about that demon chicken! It’s so great!

I’m lumping these both together not because their relationship bothers me, but rather because both of their characterizations had the same problem: they’re not super interesting. I liked them just fine, but neither one of them had any agency. Marra was basically just a narrator and the motive-creator, and Fenris was just there to be the token muscle and love interest. He did just fine with both tasks.

Since Marra is the main character of Nettle and Bone, I’ll focus mostly on her. I don’t mind a timid or wallflower main character. It’s okay for someone to prefer the sidelines and stay there. I don’t need a nervous person to suddenly become a big heroic save-the-day-because-I’m-badass-now in the crucial moment.

But you know what I do want from a main character? Effing SOMETHING. Just like, anything. Any decision making or effort or attempt to affect change. Anything. But no, Marra’s basically just there to be eyes and ears and think about stuff.

The blurb made me think this book would be about Marra undertaking three impossible tasks. To be fair to the blurb, she did undertake them… but like, in the first chapter and then they were done. In fact a lot of it happened in flashbacks, because those impossible tasks weren’t really all that important to the plot. Like, the only result of it was that she had a super cool dog made of bones following her around for the whole book, which I did enjoy.

The only plot advancing thing Marra did was decide to leave the convent and find help with killing the bad prince (and that took her many years to do). She then accepted the impossible tasks and completed them in a couple of flashbacks. In fact, it seemed like these impossible tasks were only included to hook the reader early. Granted, it totally worked as intended. I was hooked. But it set up a very different vibe than what the book actually was.

For the rest of the book, Marra was just following the dust-wife around like a scared puppy. She didn’t break the curse. She didn’t kill the prince. She didn’t even successfully warn her sister what was going to happen. She ran up to do it and then just… nothing came out of her mouth somehow. She didn’t do ANYTHING.

But Marra is my only con, and it wasn’t big enough for me to even drop down to a four star rating. This book will probably be a re-read for me just because it’s pleasant to exist in this adventurous, fairy-tale world. But what did you think of Nettle and Bone? Let me know in the comments below! And don’t forget to check out my other book reviews before you go.