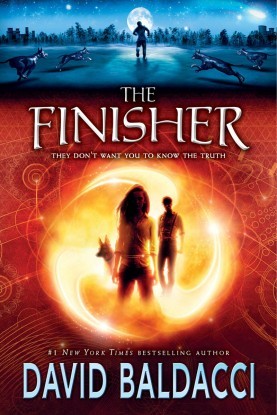 This is another hard one to rate. There were so many things about the writing style and the meandering plot that bothered me – a lot. But at the end of the day, I NEED to know what happens next!

First things first, let me advise anyone interested in reading The Finisher that even though it’s marketed as YA, it feels more like middle grade with crossover appeal for YA. Part of it is probably due to the narrator, who has the voice of an adorable little girl. She talked like an adult woman voicing characters on a toddler show.

But it’s not just the audio that makes it lean younger. It’s in the way simple things are explained in extreme detail, and how none of that detail feels tangible. Vega eats a lot of food during the course of the novel, but I honestly have no idea what she ate. The dinner experience is laid out minute by minute, but the food itself is always referred to as “a delicious meal.”

Her job at the Stacks is to finish beautiful items to be sold. Okay, sure. But do I really need a step by step job description of how to paint a ceramic dog? Not really.

These things aren’t inherently bad. They’re well written and it’s fine. But it’s definitely more at home in a middle grade book. I’m only pointing this out so that any potential readers can be sure to choose a book they’re sure they’ll like. If you enjoy some middle grade stuff in your reading list, then this one is probably a perfect fit for you. But if you have little patience for books written for tweens, then you may want to give this one a pass.

But withhold judgement for just a second, because I definitely fall into that second category. I never read middle grade for fun (with only a few very rare exceptions). And I listened to this whole book and plan to start book 2 shortly. I already know this won’t be a re-read for me, but I NEED TO KNOW what the heck is going on!!!!

The Finisher is available in libraries and bookstores everywhere. Read more reviews on Goodreads.

As always, let’s start with the pros. As I’ve mentioned before, I NEED TO KNOW what’s going on. I need the answers to multiple burning questions The Finisher has brought up. What is Wormwood? It can’t be just a village. What the heck is the deal with the mysterious Stacks? (The Stacks is the factory where Vega works). The upper floors don’t seem to follow any kind of logic, either realistic or fantastical. Random events and characters occur there and never reappear, and I need to know how and why all of these things fit together.

What in the heck is an Event? I got some half answers about that in book one, and insinuations that we will get answers to that later on in the series. There are two characters with magical abilities, and I can’t get a grasp on the rules governing those abilities. What ARE the abilities and how do they work? What are their limits? What are their potential? How do the different abilities fit together? Where do all the magical objects come from? What in the heck is going on with the shooting stars????

You’d think all of these unanswered questions would be a con. Trust me, there are many, many more than the ones I’ve listed here. But they’re not. They’re page turners. I need to know. I am so so so interested in this amazing world building. I’m so invested in it that I’m a little terrified that I’m going to be let down later in the series. But there’s so much potential here that I can’t stop reading now. I NEED TO KNOW.

The other major pro here is the roster of beasts. If Baldacci is a bit unimaginative about food details, he certainly makes up for it in the fantasy creature department. I listened to this book, so don’t even ask me to spell all those creature names. But the sensory details were spot on here. I could really picture them and was genuinely terrified of a couple. But in a good way.

The world building and the mystery development are by far my biggest pros. And the fact that I have so many cons (see below) means that they are MAJOR pros. Because those two things alone are keeping me reading.

My oh my, where to begin? Let’s start small.

I’m sure a lot of people enjoy it, but I absolutely despise it when authors make up new words for everyday objects. Especially when it’s unnecessary and unimaginative. That’s one thing that The Finisher has in spades. Dumb, simplistic names for objects that already had perfectly good names.

The fact that the people in the book aren’t called people – but Wugmorts – I’m iffy on that one. Maybe they aren’t actually people. Maybe there’s a purpose for that. I’ll hold off judgement there. But it felt silly to me when the adult characters called other people wugs. It felt like they were humoring a child by using their slang.

I was constantly irritated that boy, girl, man, and woman were substituted with male and female. I mean, it’s fine. But when you find yourself using words like malehandled (instead of manhandled), you’ve gone too far.

A dog is a dog, not a canine. I mean, yes canine is an actual word. But what the heck is so wrong with dog?

And why change “day” to light? They kept the word night, but not day. So we got lights and nights. Instead of years, we have sessions. And what exactly is a sliver? Is it a minute or a second? Because it seemed to change throughout the course of the book.

Children are “youngs.” Babies are “very youngs.” (really brought out the big guns for that one…)

And what do you guess a stickbowl is? Go on, guess.

This con is specific to the audiobook and the narrator. It drove me crazy the way the narrator voiced Delf. Early in the book, he had a stutter. Fine. But why in the crap did he sound like he had an IQ of 25 for the entire book? He sounded like a mentally handicapped character on SNL. That is to say, stereotypical – and not in a good way.

I’ve mentioned the food details already, but I’ll get specific here. Vega eats quite frequently, but it’s the most generic, boring food. This is a pet peeve of mine in fantasy, where the characters eat meat bread and cheese only.

Not rye/sourdough/crusty/whole grain — but bread

Oh, and one boiled egg that another character stole and swallowed whole without chewing.

GAG. Hurk!!! Gross. Can you imagine an entire boiled egg sliding down your throat in one lump?

Okay, back to the meat, bread, and cheese bit. Those were the only three food words we got. I think once we got the word “greens.”

Food is such a big deal in human culture. It’s a daily occurrence, and often an event in literature. The same was true in The Finisher. Meals were events — turning points in the plot or respites from the action. When Vega and John ate at Morogon’s house, it was a big deal. When Vega had dinner with Delf, it was a big deal.

So why was the biggest opportunity for sensory details ignored?

Is it just me? It’s probably just me. Either way I’m totally letting it influence my rating.

Oh my god, his name is Delph. I just saw it written on the Goodreads page! Lol! I knew I couldn’t be spelling that right.

Why all the Hate?

Here’s the big one, though oddly enough it’s the one I’m most ready to forgive.

The plot was a mess. It meandered from one unexplained event to the next. Nothing pushed, and consequences were few and far between. Vega got a map, drew it on her skin and burned the map. Later she redrew the map onto new parchment. What was the point of having it all over her skin?

She got an important book full of valuable information, so she immediately buried it somewhere and forgot about it. All that to keep it safe and secret. Well, later she dug it up and hid it at her house. Why not do that in the first place?

The events at Stacks were so random, and they only seemed to happen so that Vega could get an overpowered magical object.

In all this, I never wanted to know “what happens next!” That was never why I turned the page, and that’s a failure of the plot arc – or lack thereof.

But the fact remains that I did keep turning the page. I wanted answers for all the questions mentioned above. I still want those answers. So I’m going to check out book two next.

Except I think I’m going to get the ebook, not the audiobook again. That way I can skim over bits if I want to and get my answers a bit faster.

What did you think of The Finisher? Let me know in the comments below. And don’t forget to check out my other reviews before you go!