The hubs and I watched Chaos Walking over the weekend. I had never heard of the book it’s based on, The Knife of Never Letting Go by Patrick Ness, but after seeing a trailer for this movie several months ago. I looked into it. Needless to say, I added the book to my to-do list immediately, and I plan to purchase and devour it as soon as my current reads are finished. I was fascinated by Todd Hewitt’s idea of what it meant to be a man.

The movie was only okay, unfortunately. Since I haven’t read it yet, I can’t say if it was true to the book or not. But I can say it felt incredibly rushed. Knowing it was based on an epic sci fi novel, the most likely problem was that they tried to cram what should have been a series into a two hour movie.

I mean, after what they did for Good Omens, Game of Thrones, and His Dark Materials, clearly it’s possible to do these stories justice. Even MCU is jumping on board the streaming/binge train with their latest spate of limited series.

Movies are great. But sometimes they simply aren’t the right vehicle. (I can’t wait until someone wises up and does Harry Potter justice).

But despite the rushed quality, something specific did catch and hold my attention: Todd Hewitt’s vulnerability.

So if you haven’t seen/read this story (or at least read the blurb or watched a trailer), the basic premise is that on a new colony planet, everyone’s thoughts are on display. You can see what people picture in their minds and hear what they’re thinking, creating a cloud of “noise” around their head. And on this planet there are only men, until one day a shuttle with a single female survivor arrives and sends the entire community into chaos.

Our main characters are Todd, who lives on the planet, and the new arrival Viola. Todd grew up with the noise and has spent his entire life trying to control his thoughts.

This creates a situation entirely unique in most box office genres: You have a male and female main characters, and the male character is the vulnerable one.

The idea of a vulnerable male character is no shocker in this day and age. Society is thankfully wising up to the fact that men have emotions and needs the same as anyone else. We get plenty of that in women’s fiction, contemporary fiction, etc. But in sci fi, action, adventure, fantasy, explosions, excitement, and romance? This softer side of the male ego is a breath of fresh air. Especially since Todd is a manly man. He’s not effeminate, soft, timid, or hesitant. And yet he is vulnerable.

What do I mean by manly man? He works hard at the farm. He defends himself from assholes in town. He steals and lies. These are all the makings of a pseudo-rebellious teen.

But he also stands up and fights when someone needs help (the someone in question being Viola). He hops on his horse and follows her, despite the fact that he’s being shot at.

When it’s time to eat, he strips off his clothes like it’s nothing and walks into a lake to wrestle some unknown aquatic beast with his bare hands and a knife. Not even his thoughts betrayed fear or concern when facing what was clearly a formidible oponent.

But he was hungry. So off come the pants, and into the water he goes. 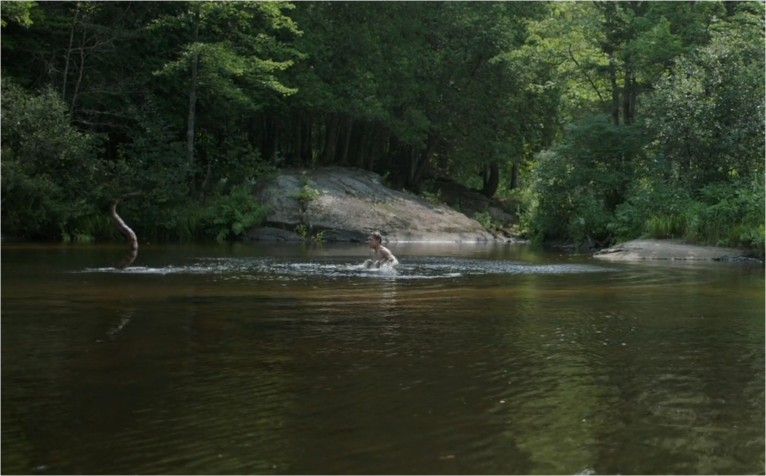 Also, bravo to everyone involved for having male nudity only. I mean, Holland’s ass is the true gift here, but it sure is nice to have a change of pace on this issue. Usually it’s the chick who automatically gets to strip.

Ahem. Okay, back to the issue at hand. Later, when one of the native Spackle people attack him, he doesn’t scream and cower, he fights back. Not only does he fight back, he overpowers the giant creature and begins beating the shit out of it. Talk about a man’s man. He only stops when Viola begs him to let the creature go.

Can I just take a minute and say: Damn, Tom Holland. Fantastic actor, and fit as hell. Look at that terrifying face. Even his wrist tendons are on edge. It’s hard to believe that’s our friendly neighborhood Spiderman.

And don’t forget that time when he needed to fix something really high up. Yup, he fucking went for it.

So what happens when you take this tough as nails, take-no-shit, manly character, and put his innermost thoughts on display constantly?

You get vulnerability in a character that would normally hide his “weaknesses” at all costs. And the viewers/readers never get to see it.

I felt so bad for this poor kid. He had no privacy, not even in his own mind. He meets the first girl he’s ever known, and he can’t even imagine kissing her without being horrified and embarrassed. She tells him her name, and then gets to listen as he repeats her name over and over in his own mind. Every stray thought about her and about himself is on display, and he just has to deal.

Even when Todd loses someone particularly heartbreaking, he sees his own sadness as a weakness. He silences his thoughts about what he has lost and tells himself yet again to “be a man.” He begins repeating his own name in his head in order to hide from Viola that he cares enough about something to be sad when it’s gone.

But he can’t help it, of course. None of us could. And during the whole scene, my heart just broke for this poor kid who thinks he has to hide his grief.

And Viola just takes his hand and tells him, “You’re a good man, Todd Hewitt.”

So considering how amazing Todd’s characterization was, I was super disappointed in the movie itself. With its poor reception, this gorgeous image of a strong, manly, vulnerable character won’t get much visibility. But it’s certainly a step in the right direction. And if the book is as good as the movie hints, then at least there I can hope to see Todd’s characterization even more rounded out. I’ll report back after I’ve read it. 😉